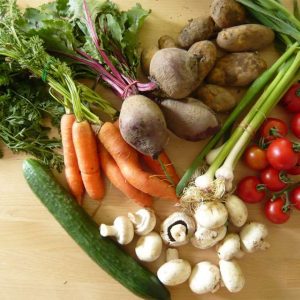 A fair enough response! There are a lot of nutritional gaps in the admittedly more diverse non-vegetarian diet than many of us probably even know about. But what we’re talking about here is a perceived gap in protein sources in a vegetarian diet. But the truth is, vegetarian food (different from vegan, where protein sources would differ) has many naturally occurring plant-based sources of protein that people are simply not aware of. To explain this, let’s start with understanding what exactly proteins are. Proteins are the building blocks of our bodies that are made up of chains of amino acids. They are an essential part of muscle tissue and hair, as well as enzymes and antibodies. Some amino acids are considered essential and, as such, proteins are integral to making up a balanced diet.

Now, while common perception is that meat is the most important source of protein in the diet – and it is true that the primary nutrient received from most meat-based foods is protein – there is a very important question that needs addressing here.  These animals that we consider important protein sources (cattle, lamb, fish and so on) are all herbivores. Ergo, the protein in their flesh comes from plants, of course! This then puts to rest any misunderstanding that protein cannot be derived from plant-based sources. According to Gabrielle Kurz, executive wellbeing chef at Jumeirah and vegetarian expert, “Chlorophyll is the building base for proteins. So, anything green is automatically a food that the body can assimilate and make protein from.”

If you don’t believe us, just ask some of the world’s top sportspersons, including names such as multiple Grand Slam winner Serena Williams and renowned Olympic sprinter Carl Lewis, who are famously vegetarian or vegan and manage to meet all the high protein needs of a sporting lifestyle through plant-based sources. In fact, most modern meat-rich diets are responsible for excessive protein consumption, which has been linked to various health problems, from simple digestive issues to cardiovascular disease and even cancer risk. The recommended dietary allowance (RDA) of protein according to US guidelines is 0.8 grams per kilogram of body weight, which works out to an average of 56g for men, and 46g for women. But it’s imperative to note that this amount varies according to body weight, activity levels and so on. However, studies have shown that on average, many people consume as much as double of that amount on a daily basis, which is more than even the most active athletes require.

While almost all foods contain some protein in varying degrees, the key is to know which ingredients are the best sources of protein and to ensure they are included in a vegetarian’s daily diet. Chart based on Protein Allowance recommended by the US Dietary Association

Some of the richest vegetarian protein sources include lentils (containing about 18g of protein per cup); beans (ranging from 12-15g per cup); peas (8g per cup); chickpeas (39g per cup); nuts and seeds (varying degrees, from 5-8g for a quarter cup); tofu (about 11g per cup); soybeans (29g per cup); mushrooms (they contain twice the amount of protein compared to most other veg); and of course dairy – from milk and yoghurt to cheeses.

Green vegetables are also essential for a healthy diet, and are an equally important source of protein for vegetarians. For instance, a cup of broccoli provides 8.1 grams of protein. Many vegetarians also eat eggs, which are considered to be one of the most nutritious ingredients out there, containing about 6g of protein per egg on average. For those who are conscious about healthy eating, foods such as quinoa, avocado, and chia seeds are immensely rich in protein as well as other essential nutrients – and they are delicious too!

Not only are plant-based sources sources of protein sufficient, they are actually better for you. They usually contain lower amounts of cholesterol and fat, and are often rich in other nutrients such as vitamins and minerals. Plus, vegetarian proteins are usually cheaper and better for the planet too. The meat industry is responsible for a ridiculous amount of greenhouse gas emissions and uses a larger volume of natural resources than what’s used in plant farming. If all of that doesn’t have you reaching out for that kale and lentil soup, we don’t know what will!