Year of the Plant Butcher: Mock Meat Gets Real

Year of the Plant Butcher: Mock Meat Gets Real

VeggieBuzz• 29 September, 201629 September, 2016For most meat lovers, mock meat is more appealing as a conversation piece than actual food. But there’s a new movement on the rise that aims to completely change the concept of meatless eating. Say hello to the plant butchers. It sounds paradoxical, but that’s the idea. A rising group of creative and ... 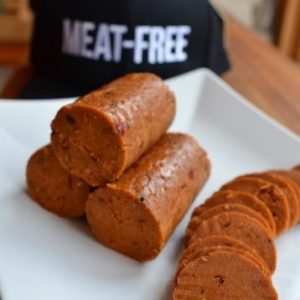 For most meat lovers, mock meat is more appealing as a conversation piece than actual food. But there’s a new movement on the rise that aims to completely change the concept of meatless eating. Say hello to the plant butchers.

It sounds paradoxical, but that’s the idea. A rising group of creative and inspired chefs is taking the mockery out of mock meat by using plant proteins in unique ways. With a little skill and craftsmanship, these culinary masterminds are repurposing ingredients like beans and beetroot into meat-like products that look eerily similar to the real thing. Cuts of 'beef' by The Herbivorous Butcher

In the past five years or so, this idea has slowly been gaining ground as meatless butcher shops have started popping up in parts of Europe and North America. Herbivorous Butcher, started by siblings Aubry and Kale Welch in Minneapolis, started out as a farmer’s market attraction and opened its first butcher shop earlier this year. Yam Chops, located in Toronto, has everything from mock chicken products to meatless shawarma!

It’s just another way to repurpose an idea commonly associated with eating meat and to invite discussion about vegetarianism. You might buy (or skip over) a pack of frozen meatless burgers in the supermarket. But when you walk into a shop where a knowledgeable butcher can guide you through the various cuts of ‘meat’ and explain the process behind them, it gives you a whole new appreciation for it. Black bean and beet 'chorizo' burgers by No Evil Foods

In many cases, it really is hard to tell the difference between the artificial meat and the real thing. It also tastes much more authentic than the meatless products that are currently around.

The upside is that you get all the flavor of meat but with fewer calories, no cholesterol and a more positive environmental impact.

A major component in many of these mock meats is wheat or other grain based proteins, so they aren’t gluten-free. People are also cautioned against being too dependent on fake meats for their protein intake. After all, a healthy diet includes a whole mix of food types, and there are purely plant-based protein sources as well. Monk's Meats fires up the barbecue with wheat protein 'steaks'

Then why bother with fake meat?

Like it or not, meat is still a big factor in many people’s diets. If you’re trying to convince a meat eater to go vegetarian, a stuffed zucchini or cauliflower steak isn’t going to be enough. A plant-based food that looks and tastes like real meat makes it much easier to bridge that gap. In fact, many customers of vegetarian butchers buy meat lookalikes just to trick their partners or spouses into eating meatless meals!