Jennifer McNeill• 6 February, 20176 February, 2017Let's be honest. Even if you feel pretty comfortable in the kitchen, cooking yourself is never going yield the same result as a dish ordered at a restaurant. And that's fine. Your kitchen at home is not the well-oiled machine that a restaurant kitchen is; you don't own all the top of the range utensils, ... 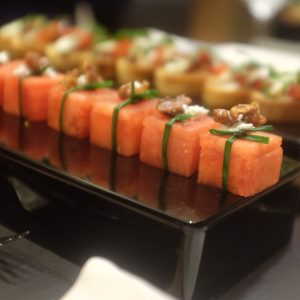 Let's be honest. Even if you feel pretty comfortable in the kitchen, cooking yourself is never going yield the same result as a dish ordered at a restaurant. And that's fine. Your kitchen at home is not the well-oiled machine that a restaurant kitchen is; you don't own all the top of the range utensils, have access to the best ingredients and most significantly, you don't have the expertise of a seasoned chef to hand. That is - until now.

Last week, the Veggiebuzz team spent an evening buzzing around the cooking studio at Fairmont The Palm and honestly, I'd have raved about the food had it been served to me in a 5* restaurant. The fact that I made it with my own hands only ramped up its deliciousness!

'The Chef’s Palette by Gaggenau' cooking studio launched at Fairmont The Palm late last year to acclaim from amateur chefs and curious foodies alike. So to say we were excited when they invited us to have our own four-hour Master Class session would be an understatement. The master class menus range from basic culinary techniques to seasonal menus and dinner party entertaining. Of course, we wanted vegetarian - so vegetarian we got! Image courtesy of Fairmont the Palm

Our appetites were piqued immediately with a spread of four canapés - two vegetarian and two vegan - waiting for us as we arrived. The watermelon parcels won for presentation but it was the pistachio cones filled with hummus that no one could get enough of. Then it was time to take our stations and get cooking. Throughout the session, our chefs skillfully (and at times, very patiently) walked us through each step, providing us with information about the ingredients and cooking technique that really made a difference. Blindly following direction is one thing but actually understanding what you're doing and why is the secret to success.

We started with a roasted heirloom tomato and goats cheese tart, made with organic tomatoes that tasted better than any tomatoes I've ever had in Dubai. The chef taught us how to properly sharpen our knives so they sliced through tomatoes with little to no water lost, a culinary skill I never knew I always needed. The tart was incredible and we all ate a little too much of it considering it was just the starter. The true star of the show was the main course, a beetroot risotto that was so good we quickly forgot how full we already felt. Far too complicated to be attempted by the everyday cook, risotto is one of those dishes that most people run from in a cookbook. And yet all eight of us there that evening sat down to a plate of al dente and creamy risotto that could not have been more perfect. And here is the recipe, if anyone is feeling brave enough to attempt it themselves (be brave!).

The evening ended with a demo from Fairmont The Palm's Executive Pastry Chef. We watched the entire process of him making a deconstructed, vegan Black Forest cake like it was the season finale of our favorite show; utterly transfixed. He paired the individual chocolate cakes with homemade cherry sorbet, again made in front of us with liquid nitrogen, and house-made vegan vanilla marshmallow which was blasted with a blow torch to a slightly roasted effect. It was quite a performance and the end result was something so decadent, you'd have never known it was vegan.

At the Chef's Palette, there's a choice of two cooking classes with bespoke packages available upon request. The four-hour Master Class that we did (AED 555 per person) focuses on specialist produce and includes hands-on cooking fun with a chef, personalised apron and take-home recipe card.

The little ones can get involved too. You can book a special ‘no adults allowed’ session with the studio for a children's birthday party with a difference for just AED 250 per child.

Image courtesy of Fairmont the Palm