The Fascinating Future of Sustainable Food

The Fascinating Future of Sustainable Food

Jennifer McNeill• 8 November, 20168 November, 2016Early this summer, Google Head Quarters received some positive press when they announced their plans to start using exclusively vegan shrimp on campus menus. This came after Google’s top executive Eric Schmidt named plant-based food as one of six most important technology trends today, stating that he saw a revolution approaching in which plants ... 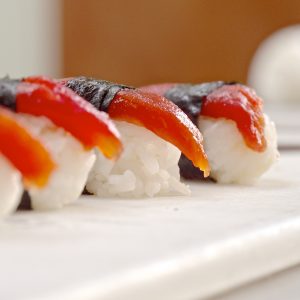 Early this summer, Google Head Quarters received some positive press when they announced their plans to start using exclusively vegan shrimp on campus menus. This came after Google’s top executive Eric Schmidt named plant-based food as one of six most important technology trends today, stating that he saw a revolution approaching in which plants would replace meat.

Well, the revolution has begun. And we've rounded up some of our favourite and creative plant-based meat-alternatives on the market today. We can all agree that sushi is delicious. Extinction, toxins and cruelty, on the other hand, aren't quite as appetizing. Overfishing - when more fish are caught than the population can replace through natural reproduction - is a global environment problem. Pavan Sukdev from the UN Environment Program has said, “We are in the situation where 40 years down the line we, effectively, are out of fish.”

The bluefin tuna population has dropped by 96 per cent as a result of overfishing and the tuna are not the only victims  - 100 million sharks and tens of thousands of turtles are killed every year as by-catch.

Created by Jimmy Corwell, one of the top chefs in the United States, Tomato Sushi is a vegan alternative to bluefin tuna. It is made with just six ingredients that, through a boutique cooking process, turn tomatoes into juicy and meaty slices that not only look exactly like ahi tuna, they pass the taste test too. "I could never be a vegetarian, I love burgers too much!"

While we would argue that veggie burgers are truly delicious when they're in their natural bean-y and grain-y state, there's something about the taste and texture of a meat burger that is held to a high regard.

Beyond Meat's Impossible Burger was created by a biochemist in Stanford in an attempt to tick every meat-y box whilst keeping it vegan. Bite into the Impossible Burger and you'll find pink and flesh-like insides, just like the real deal. This was done by including a compound called “heme” which is a protein that is found in both blood - and in the roots of certain plants.

Apparently the Impossible Burger not only looks the part, it smells and tastes the part too. And, it holds up better than a real beef burger in the nutrition department too. According to its founder Ethan Brown, these burgers have "more omegas than salmon. More calcium than milk. More antioxidants than blueberries.”

Unfortunately for us, it's currently only available in the US.

Chato (that's cheese made of potatoes, of course) After learning that hundreds of thousands of potatoes are reportedly wasted each year in Australia, Australia food inventor Andrew Dyhin set about to solve this issue. This was twelve years ago and he was been developing his revolutionary product chato ever since.

Potatoes waste is not only a problem down under, according to the UN Statistics Division's Food and Agriculture Organisation, 385 million tonnes of potatoes were produced in 2014 with an estimated 25% of that going to waste. And the carbon footprint of food waste is estimated at 3.3 billion tonnes of CO2 released into the atmosphere every year.

Chato is not quite ready to be distributed to the public as Dyhin is still looking for investors to up the scale of his production. But the concept is fascinating. Dyhin believes he has created a vegan cheese that looks like cheese, smells like cheese and - perhaps most importantly - melts like cheese. All of this, he claims, he has done with just one sustainable ingredient: potatoes (and not a single cow in sight).