Arpan Ghosh• 12 March, 201612 March, 2016Taste of Dubai is the grand finale of the Dubai Food Festival, a weekend of great food and great music to cap off an amazing two weeks of delicious dining. It is the place to be to experience some of Dubai’s best restaurants in the same place, and a chance to meet award-winning chefs ...

Taste of Dubai is the grand finale of the Dubai Food Festival, a weekend of great food and great music to cap off an amazing two weeks of delicious dining. It is the place to be to experience some of Dubai’s best restaurants in the same place, and a chance to meet award-winning chefs from all over the world. This year’s event has been bigger and better than before, with restaurants such as Vivaldi, The Croft, Bread Street Kitchen and Giggle & Spice, an exclusive pop-up created by celebrity chefs Jenny Morris and Reza Mahammed! There’s also some great music to complement the food, including special guest Boney M. Aside from enjoying some amazing food, Veggiebuzz got the opportunity to speak with some of the chefs at the event, including Alfredo Russo (twice Michelin-starred culinary mind behind Vivaldi by Alfredo Russo), Alfred Prasad (youngest Indian chef to receive a Michelin star), Jun Tanaka (Japanese-British chef known for his appearances on Food Network and BBC One), and of course, the Giggle & Spice chef duo, Jenny Morris and Reza Mahammed (most recently, co-hosts of Fabulous Food Academy on Food Network). They shared their grassy perspective, and what we can look forward to in the near future! VB: Have you noticed any global vegetarian trends throughout the years?

Chef Prasad: Yes, more chefs have started to cater to vegetarians, and to make more substantial food for vegetarians. It is definitely a growing market, and especially in Europe, it is catching on. Most high-end restaurants, or any restaurant with a tasting menu, will always have a vegetarian option available, and the chefs will ensure that it is comparable to the non-vegetarian version in terms of options. They might even price it the same as the regular menu because they’re that confident in the quality of what they’ve produced.

Vegetarians are tired of eating the same old salad and jacket potato when they go out to eat. The smart chef will not want to alienate a growing customer base and will certainly try to accommodate them as much as possible.

Chef Mahammed: There has been a rise in vegetarianism in recent years, especially as people are more concerned with where their food is coming from. We see what the conditions are like on animal farms, and the amount of processing that goes into food, and it has led people to demand fresher and better quality food. Food intolerances are also more prevalent nowadays, because of all that processing that has affected our food and our palates. So yes, there are more vegetarians and vegans who are seeking out fresh, seasonal produce.

Chef Morris: Seasonality is very important, of course. It affects the flavor and the texture of the food. I agree with Chef Reza, all the chemicals and processing used in our food is starting to turn people off. And when you eat fruits and vegetables out of season, that can affect your health as well. After all, certain ingredients are in season because that’s when we’re meant to eat them. And I think people are starting to get that.

Chef Tanaka: I don’t think of eating vegetables as a trend. I think it’s just something that makes sense to do. The kinds of food you eat and how much of it tends to change over the seasons. It’s something that’s being understood better, but I wouldn’t consider it a trend.

Chef Russo: Vegetarianism is becoming more popular now all over Europe, and certainly in Italy. Of course, we have a lot of vegetarian dishes in Italy. Many of our simplest dishes are vegetarian. All kinds of pasta with really simple sauces and what is grown in the field. But it is becoming much more common all over Europe now, and also veganism. VB: What would you consider to be your favorite vegetarian dish?

Chef Prasad: Having grown up in an Anglo-Indian family (my mother’s family was non-vegetarian while my father’s was strictly vegetarian), there was a lot of meat on the table. Probably the closest I came to vegetables was potatoes (laughs). And many of my guilty pleasures in terms of vegetables involve potatoes, such as crisps and the like.

The best dish I’ve had recently was in India. It was a beetroot chop, and the chop itself was quite standard. But the way it was prepared and the condiments that were used made it really delicious. Beetroot is definitely a favorite vegetable of mine. I’m also quite fond of broccoli, cauliflower and all vegetables in that family when it comes to cooking. They’re very versatile and I enjoy working with them and coming up with different ideas.

Chef Morris: Okra. I love anything to do with okra. It’s great to eat and to cook. I enjoy just frying it up in some batter or cooking it in a nice tomato-based sauce. It’s best to have okra when it’s nice and crisp, that gives it a good texture. Many people cook it in such a way that it becomes slimy, and that’s just off-putting. Give me some nice crisp okra any day!

Chef Mahammed: Oh yes, okra is a good one! And I agree, slimy okra is just no good. Really important to get some crunch in there. Another favorite of mine is bitter gourd. I love cooking it in a curry or stuffing it, or just slicing it very fine and frying it up. It’s absolutely delicious, and it’s also good for you!

Chef Tanaka: It’s hard to pick a ‘favorite’ vegetarian dish for me. What I eat changes with the season, and I have different cravings at different times, so to pick one all-time favorite is just not possible. If you were to ask what I’d love to eat right now, I’d say morel mushrooms, asparagus and wild garlic. They’re in season right now and there are so many wonderful things you can do with them. In a few months, I’m sure my answer will change!

Chef Russo: As I said, we have just so many wonderful vegetarian dishes throughout Italy. One of the dishes I am serving here is Paramigiana Melanzane (Eggplant Parmesan), and that I love very much. It is definitely a favorite. Also a nice radicchio salad. VB: What new projects do you have in the pipeline?

Chef Prasad: Well, as you know, I’ve spent 14 years working at Tamarind in London, which has been a great experience. I left them quite recently to pursue my own venture, so now I’m working on setting up my own restaurant. It’s going to be small Indian sharing plates, with plenty of vegetarian options. A lot of the vegetarian food that we have in Indian cuisine, such as Aloo Gobi or Palak dishes are really just sides, but we consider them mains. I’d like to make some dishes that are more substantial.

The main focus will be to combat two stereotypes of Indian food: that it’s too heavy to be lunch-friendly, and that it’s too spicy. All of the food at my restaurant will be quite light, and there will be varying spice levels, as indeed there are in foods throughout India. I’m currently on the hunt for a location. Hopefully it’ll be up and running by the end of the year.

Chef Morris: Well, I’ve just opened my own restaurant, Yumcious (in Cape Town) at the end of last year. We do about 30 or 40 different dishes a day there, focusing on global cuisine, so there’s a little bit of everything. I love working with vegetables, so there are a lot of vegetarian and vegetable-focused dishes. There are meat and seafood options too, but definitely plenty of vegetable plates.

Chef Mahammed: After this, Chef Jenny and I will be going to Taste of Kuwait, and then I’m off to France where I’ll be conducting culinary tours. We’ll be visiting lots of different chateaus and getting a better understanding of the local cuisine. There are also a few personal projects I’m working on, and toward the end of this year Chef Jenny and I are putting out a cookbook based on Fabulous Food Academy. So it’s a pretty packed year!

Chef Tanaka: I just opened my restaurant (The Ninth) in London this past November, so that’s going to be my focus now. It took a few years to get that all set up, and I’m just going to keep working at it. It’s French Mediterranean cuisine with sharing plates. The food is divided up into sections, so there are different kinds of meat, seafood, and there’s a separate vegetarian section.

It’s all seasonal produce, of course, so it’ll change on a regular basis. But I’m definitely looking to create some good vegetarian dishes. We’ve got Cavolo Nero (black cabbage) and salsify on our menu right now, and the idea is to create something tasty that’s not a ‘side’.

Chef Russo: It’s too early to talk about anything yet, but there are a few projects coming up. I have some ideas in mind that I hope to implement. And of course, there is always Vivaldi, to keep that Italian flavor in Dubai! 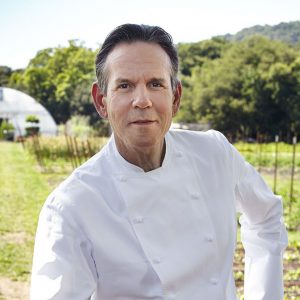 16 Olympians Who Are Vegetarian or Vegan 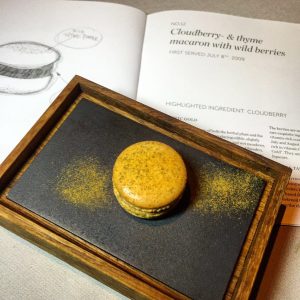 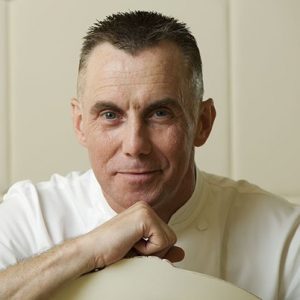 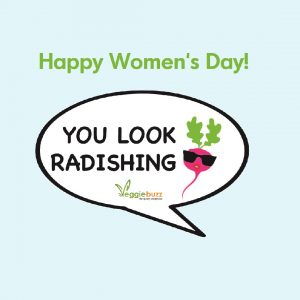 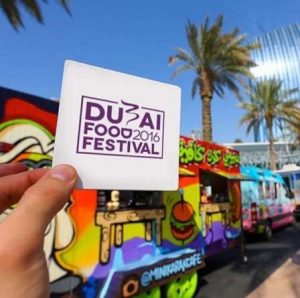 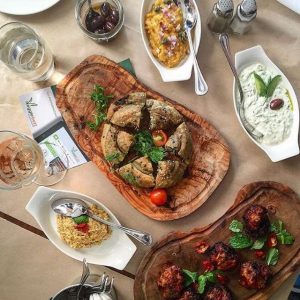 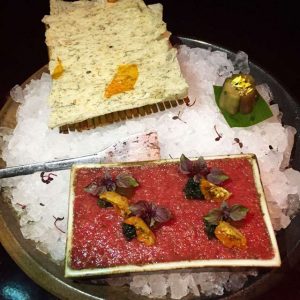 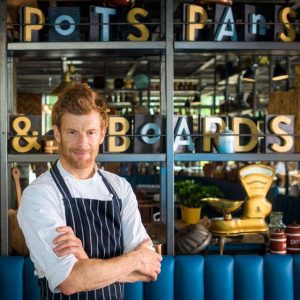 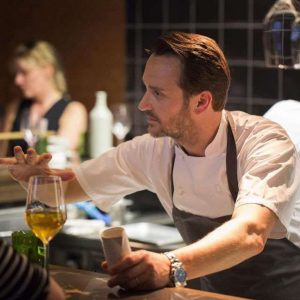 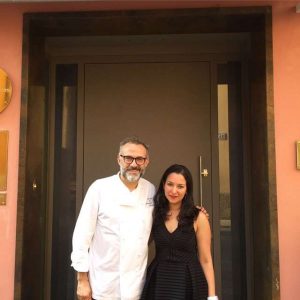 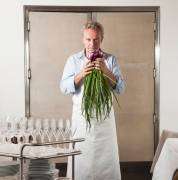