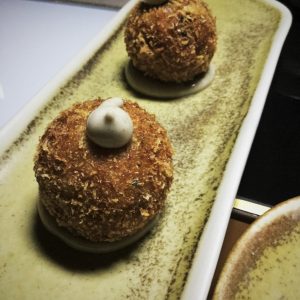 LaLuz, which opened earlier this year at the Four Seasons DIFC, offers a contemporary take on Mediterranean cuisine, with an emphasis on dishes from Barcelona and its surrounding regions. The menu has been put together by executive chef Alain Devahive, an alum of three Michelin star restaurant elBulli in Barcelona, well known for its experimental approach to food and extensive use of molecular gastronomy.

The restaurant has a sleek, contemporary look with dark brown dominating the palette and a coloured open kitchen on one end to add a contrasting note. Wednesday is Rumba Barcelona night (from 7pm to 11:30 pm), with live entertainment and a special set menu for AED 275, consisting of a selection of dishes that have been hand-picked from their regular a la carte menu, and that's what we have been invited to review tonight (Note: the a la carte menu is also available on Wednesdays). The meal begins with a selection of pinchos, or small snacks. It’s a concept that is specific to the Basque region of Spain, and is distinct from tapas. The first of the pinchos is Spherical Olives, little globes of olive gel filled with concentrated olive juice, which is a bit too strong for my palate. Gazpacho, served in little cups, is refreshing, while Mushroom Croquettes with a creamy truffle mayonnaise are just out of this world. The textures and flavours on that dish are absolutely perfect. One of the more unusual dishes is the Laluz ‘Tortilla’, a martini glass with a layer of egg yolk emulsion on top of potato foam and a confit of onion. It’s recommended that we dip a spoon right to the bottom of the glass to get the full flavor. It’s light and flavorful, and the onions really bring it all together. The final appetizer, eggplant with black olive miso, is good but unexceptional.

The main course is Catalan Arros, a rich dish that’s similar to paella. There’s a nice mix of vegetables in the dish, including tomatoes, carrots and broccoli, though the most prominent flavours are of mushrooms and bell peppers. While delicious, it does feel a tad bit too light for a main dish. At about that time the music, comprising a medley of pop songs and lounge tunes, dies down and is replaced by the strumming of a guitar. A young man sits on a stool in front of the bar, playing a soothing tune as he starts to sing in Spanish. As the tempo of the song increases, a young woman in a flamenco dress takes the stage (or in this case, the space in front of the bar) and dances to the beat. The night’s entertainment has begun. Audience participation is encouraged, though I’ve never been much of a dancer myself.

Instead of the usual single dessert at the end of the set menu, we’re presented with a quartet of desserts as the manager wants us to sample some of their best dishes. There’s a chocolate brownie with passion fruit granita (which looks like chocolate ice cream and makes for an unexpected flavour pairing), goat’s cheese cheesecake with raspberries and beetroot sorbet, a mini Magnum ice cream stick made with Catalan cream, and torrijas, a Spanish dessert that’s typically served during Easter and is similar to French toast. It’s hard to pick a clear favorite here as they all taste great. LaLuz puts on quite a show on Wednesday nights, with a charming atmosphere, knowledgeable staff, and some flavourful reinventions of regional Spanish cuisine. I did find the Rumba night menu to be a tad light, but its a solid pick for those looking for a light meal with some drinks and music after work.

Note: All dishes in the Rumba Night set menu are available on the regular a la carte menu as well.