A Dreamy Dinner at Ruya

share A Dreamy Dinner at Ruya on social media channels 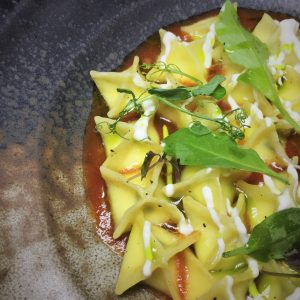 Ruya, meaning dream in Turkish, is one of the latest restaurants to open up at the Grosvenor House in Dubai Marina. The menu features Anatolian cuisine with a more contemporary twist courtesy of Executive Chef Colin Clague, who has previously worked with Zuma and Jean-Georges Dubai. Is there enough fare for the vegetarian diner, though, or will you have to settle for dreaming of a good veggie meal? I dropped in for dinner one night to find out. The interior of Ruya is like an upscale Middle Eastern coffee house, done up in warm tones of brown and deep orange. The dining room takes up the majority of the space, with a bar and lounge set up in one corner. Perhaps the most striking feature is the open baking station in the centre of the restaurant.  There’s another open kitchen in the back corner, and an outdoor area with a view of the Marina.

I start off with some crudités, a selection of raw vegetables served with red pepper yogurt, which is a nice little snack to begin. My selection of appetizers includes the classic Turkish filo pastry dish known as Borek, and burnt watermelon and goat’s cheese salad. The borek are presented as cigars, unlike the triangular pastries I’ve had in the past. They’re quite light despite the feta filling, and quite crisp. In recent months, I’ve come across quite a few variations on watermelon; Ruya’s version involves compressed cubes that have been bruléed slightly to intensify the flavour, complemented by salty goat’s cheese and pine nuts. For the main courses, I go with Confit of Artichoke, manti, a Turkish take on ravioli, and Guvec, a stew of baby vegetables served in a clay pot. I’m told that the latter is a recent addition to the menu, specifically to satisfy vegetarian diners. The manti, stuffed with goat’s cheese, is balanced out by a subtle tomato sauce and the sweet flavor of dill. In contrast, there’s a much sharper tomato broth used for the Guvec. The artichoke, which is a popular ingredient in Turkish cuisine, has a robust and hearty flavor with a sour tang from the pomegranate dressing. However, the sourness of the dressing can get a bit overwhelming after a while. I end the night with Firin Sutlac, which is rice pudding with raspberries, rhubarb ice cream and rhubarb lokum (Turkish delight without the sugary coating). It’s a beautiful medley of sweet and floral flavors, and the caramelized top layer of the pudding tastes almost like chocolate. Ruya has quite a few delights in store for vegetarians, including a vegetarian set menu, though fair warning: cheese is a main component of several dishes. In a bit of a twist from what I’ve experienced at a few other restaurants recently, there are more vegan main course choices at Ruya than appetizers. Still, the food is delicious and the atmosphere is ideal for an after-work meal (or drink).

share A Dreamy Dinner at Ruya on social media channels