Billionaire Mansion: Dinner and a Show 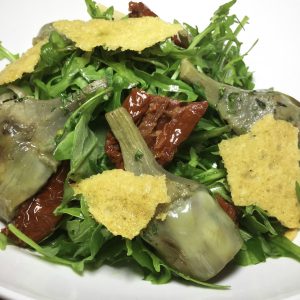 The room goes dark as I scoop another spoonful of salad onto my plate, and colored spotlights point to a stage hidden behind a side wall. Performers dressed in colorful and, in some cases, quite bizarre outfits (like the girl with a golden cage around her head) combine dance and acrobatics into a dizzying performance that lasts only a few moments. When the lights come up again, it’s as if I’ve just woken from a very strange dream. Unusual combinations are almost a running theme at Billionaire Mansion in the Taj Dubai. Opened by Italian restaurateur Flavio Briatore, Billionaire Mansion shares space with Sumosan, a Moscow-based Japanese restaurant. An olive tree stands proudly in the center of the elegant dining room, announcing the restaurant’s Italian roots, whereas one of the walls resembles a partition in a traditional Japanese house. Ring shaped light fixtures hanging from the ceiling remind me of hula hoops, serving as a teaser for the playful performances that are sprinkled throughout the evening.

It’s important to note that there is no division between smokers and non-smokers in the restaurant. Much like a bar, people can light up as they please, and I spend the evening trying to ignore the acrid smell of smoke around me. It’s a pity, as I quite like the overall atmosphere of the place. The menu is divided between Italian and Japanese cuisine, and I pick a few options from each side. Artichoke salad with sun-dried tomatoes and rocket, and lentil salad make for a pretty good start. The earthy artichoke finds a nice flavor and texture partner in parmesan crisp ‘croutons’. The lentil, served with orange slices and cherry tomato halves, has some tangy notes to it, but is fairly standard overall. From the Japanese side, we have date, spinach and chestnut gyozas. They’re delicious, especially with some chili soy sauce, and they taste almost as good as the gyozas at Zuma.

As we’re finishing up the appetizers, a heated argument breaks out between a couple that’s sitting behind us. Their spat escalates to the point where the entire restaurant is focused on these two yelling at each other. To everyone’s surprise, they both start dancing, leading into the evening's first performance. That’s a clever way to grab the audience’s attention! The dance is over in a flash, and we turn our attention to the main courses. The caprese pizza is a simple pleasure, with juicy tomatoes and peppery rocket leaves, though the crust is a bit softer than I’d like toward the center. Gnocchi is a tricky pasta to make, occasionally ending up too dense or too chewy, but this one is perfectly pillowy and served in a zingy tomato sauce.

Pan-roasted tofu is the offering from the Sumosan kitchen, and a side order of Mushroom Medley. Pure white slabs of tofu sit atop a miso mushroom sauce. Their texture is just right, with a slightly crisp exterior and a soft (though still firm) interior, and once coated thoroughly in the sauce, they are an explosion of flavor. The mushroom dish doesn’t excite me as much as I expected it to. Surprisingly, the teriyaki sauce (and some hints of sesame oil) neutralizes the earthiness of the mushrooms, resulting in a muted flavor that doesn’t rise above average. A few more performances materialize over the course of the meal, some on the stage, others around the dining room. It puts us in a lively enough mood to over indulge a bit when it comes to dessert. The most popular option at Billionaire Mansion (as it often is at many restaurants around town) is the chocolate fondant. Dark and white chocolate coated in a soft pistachio shell is encased in a caramel ‘net’; visually, it’s a dessert worthy of any billionaire. It tastes even better than it looks, marrying the flavor of pistachio and chocolate wonderfully, and balancing it all out with vanilla ice cream. We also order the tiramisu and apple crumble, as the portions of each are quite small. The tiramisu is ok, and the crumble provides a nice alternative to the rich fondant. Billionaire Mansion is an interesting addition to Dubai’s culinary landscape, with an elegant setting and flashy performances. The food is quite good and the service is top-notch; all the servers are smartly dressed in white tuxedos and are extremely hospitable. The lack of a separate smoking section is a major issue, however, and is the one factor that would prevent me from going back there.