It’s an exceptionally windy afternoon, and the Veggiebuzz team is wondering if maybe it was a mistake to sit outdoors today. We’re at Mezza House in Downtown Dubai, and though the interior is quite inviting, with generous splashes of cool turquoise in its furniture and décor, we opt to enjoy the late spring weather. Provided all our food doesn’t get blown away, of course. Our meal is a blend of some mezze staples and a few dishes we haven’t tried before. In spite of the wind, it is rather warm, so I opt for a lemon iced tea to cool off. After the first sip, I find the lemon flavor to be overpowering, to the point that my face puckers up every time I have a drink.

Mezza House, as the name suggests, has built its reputation on the strength of its mezze (worth noting that they also serve shisha), citing fattoush as one of its most popular items and highlighting that its hummus is generally considered to be the best in town. The fattoush is nicely zingy, and the addition of pita croutons on top gives it some more texture and a good crunch. The pomegranate dressing, however, proves to be just a bit too much. This is also the case with Rocca Za’atar, which drowns out the flavors of onion, za’atar and garlic in the same pomegranate dressing. If it were added with a subtler hand, both dishes would be much stronger. On the opposite end, there’s the hummus, which is definitely one of the silkiest and creamiest that I’ve had. In terms of flavor, it’s very subtle and in my opinion, overly so. There’s not a lot of chickpea coming through, only a mild hint of tahini. Muhammara has been a favorite ever since I discovered it several years ago, and Mezza House’s version tastes just right, with a good balance of sweet, salty and nutty flavors. It is, however, drier than the ones I’m used to, resembling more of a breadcrumb mixture than a paste. Two of the newer dishes we try (new for me, that is) are M’dardara and Mousa’sa. The former is a slow-cooked lentil and rice dish with an even, earthy flavor that’s topped with delicious deep fried onions, while the latter consists of eggplants stewed with tomatoes and chickpeas, and has a nice tang to it. Another mezze staple for me is Batata Harra, potatoes sautéed with garlic and herbs. Golden and crisp on the outside with a soft center, they’re little cubes of garlicky goodness. Strangely, falafel is nowhere to be found on the menu, but can apparently be prepared on request. The falafel are nicely presented, forming a ring around a bowl of tahini, but they have a slightly undercooked flavor to them. It’s almost as if they were fried up in a hurry.

For me, there’s no better way to finish a meal like this than with Mohalabiyeh, creamy milk pudding flavored with rose water. While the flavor is a bit mild, I’m more than satisfied with it. Perhaps a bit less successful is Nasso Ghazal Beirut, which is apparently one of Mezza House’s most popular desserts. The description of cotton candy mixed with ice cream sounds intriguing, but the ‘cotton candy’ is denser than I would have expected and the overall flavor leaves me unexcited. In spite of the breeze, the worst casualty we suffer is a few napkins. The mezze is hit or miss, with the main problem being the strength of the flavor. It’s either too overpowering or too mild in some of the dishes, with only a few standouts among the lot. Bold proclamations of the ‘best x in town’ might be a bit much, but it makes for a decent enough meal.

GRASSY SUMMARY
Veggie Friendly: ✔  Vegan Friendly: ✔
Pros: Batata Harra is a must-try, good view of the Downtown area
Cons: Flavors are very hit or miss, too much dressing on the salads
Price: $$ (50 - 200 AED) 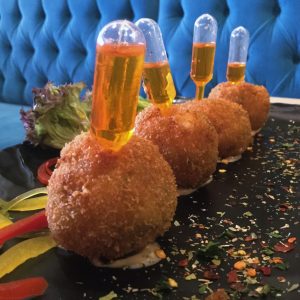