An Oil-Free Dinner at Govinda’s Jumeirah 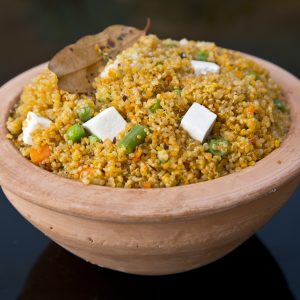 Govinda’s is known for its focus on Indian vegetarian cuisine, and especially Vaishnava cooking. This style of cooking, also known as sattvic, excludes many forms of root vegetables, so no onion, garlic or potatoes. Instead, dishes use fruits, ripe seasonal vegetables, nuts, seeds and dairy products. It was believed to be a healthier form of eating, but many of the dishes are cooked in oil or ghee (clarified butter), which does tend to add a lot of fat content. Govinda’s aims to change that with their recently unveiled oil-free menu. Veggiebuzz has been invited to sample this menu, so I head over to the Govinda’s branch in Jumeirah, located in a villa along the Beach Road. The restaurant has giant murals covering its walls, depicting Indian folklore and scenery. It’s very brightly lit, a nice change from the dim indigo lighting it had before. There is still blue light emanating from under the clear-topped tables, though, which adds a nice ethereal touch.

As always, the meal begins with papadum and some chutneys for dipping. For the evening’s drinks, there’s non-alcoholic sangria, which is delightfully refreshing. It’s not on their regular menu, but I’m hoping it’ll be added in at some point. The appetizer takes the form of Kashmiri Seekh Kebab, mixed vegetable kebabs with some dry fruit mixed into give it a little bit of sweetness. The kebabs are followed by a shot of a mango drink that acts as a palate cleanser. It’s very reminiscent of mango lassi and quite delicious.

For the main course, there’s Exotic Govinda’s Vegetable (mixed vegetable curry), Paneer Angoori (paneer with grapes) and Dal Palak (spinach dal). The one thing I’ve generally loved about Govinda’s food is that it’s not overly heavy on the spices, allowing the flavor of the ingredients themselves to shine through, and that’s definitely the case here as well. All three dishes are very good, though I’m partial to the sweet and tangy notes in the paneer dish. They’re also not overly filling, as Indian food generally tends to be. The breads are also oil-free, but can be served with a coating of butter or ghee if preferred. There’s also Quinoa Biryani, which tastes more like another Indian rice dish known as khichdi to me, but is a solid dish and a welcome change from plain old rice. Dessert is a bit of a surprise. The Nutella Lava Cake is not a regular menu item, but is generally prepared on special request. It’s served with a scoop of vanilla ice cream on top, and chocolate sauce is drizzled over it at the table. The cake is moist and the hazelnut flavor of the Nutella filling makes it earthy and not too sweet. While delicious, it does seem like a slightly odd dish to serve when presenting a healthier menu.

I’ve generally been fond of Govinda’s food because of its simple flavors, and adding an oil-free element makes it even better. The food tastes great, and doesn’t have the heaviness normally associated with an Indian meal. There's also a separate vegan menu for those that could do without the added cream.