Eating to the Beat at Indie Lounge 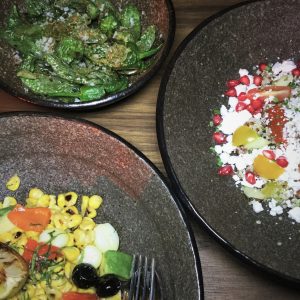 When we reviewed Gaucho at DIFC last summer, we had heard whispers of a new space opening up on the restaurant’s upper level. We later learned that the new restaurant was Indie, a lounge concept that started out in Beirut two years ago and has now made its way to Dubai. After a few months of anticipation, Indie finally opened its doors a few weeks ago, and it goes without saying that we had to check it out.

Consisting of a lounge, dining room and three bars, Indie has a very relaxed vibe to it. Wooden accents, shelves lined with antique knick knacks, and bubble-encased hanging bulbs give the whole place a very retro charm. On the other hand, the dim reddish lighting and DJ station (playing jazzy indie music) add a more contemporary touch. This blend of eras comes together to create an easygoing atmosphere that’s just right for unwinding after a long workday. Most of the dishes at Indie are sharing style, including little bites and tapas, along with some main courses. I start with the Pimientos de Padron, fried Spanish bell peppers coated in rock salt and a Japanese spice mixture known as Togarashi. The peppers are a bit on the greasy side, but they are addictive, and I can’t stop munching on them over the course of the meal. I also get some edamame, which provide a nice mild counterpoint to the savory peppers.

I follow that up with a pair of salads: Super Corn and Mediterranean Quinoa. The former is a mixture of sweet corn and Peruvian corn (much larger kernels and reminiscent of chickpeas) coated in a lime dressing. Both types of corn are quite sweet and are balanced out by the tangy dressing, resulting in a nice zesty dish. The quinoa salad is dominated by the strong salty flavor of crumbled feta cheese, which also overshadows the sliced cherry tomatoes and cucumbers in the dish. As a cheese lover, I have no problem with that, but it might be a bit too much for others. At this point I should mention that the young man who cheerily informed me that he would be my server for the evening seems to have disappeared. I glimpse him walking by a couple of times, but I don’t have much interaction with him for the remainder of the evening. Some of the other servers pick up that slack, though, and they make sure everything is well taken care of.

The vegetarian options in the main course section consist of pasta dishes; that seems to be the norm in casual restaurants and bars. I opt for the Asparagus Risotto and the Ravioli. It’s worth noting that the ravioli is normally served with a foie gras sauce, but you can get it with a truffle sauce instead. Indie’s ravioli are more like oversized dumplings, served on a long plate with the sauce on the side. They’re baked, giving them a little color and some crunch along the edges. The pumpkin and mascarpone filling is delicious, and drizzling truffle sauce over top takes the dish to another level. However, there are only three pieces of ravioli and I finish them off without a problem, which makes me question if this is really much of a main course. On the other hand, the asparagus risotto is a suitable heavy dish with simple, clean flavors and a texture that’s completely spot-on. There’s not a whole lot I can say about this dish. If you’re a fan of risotto, you’ll enjoy it.

As I look over the dessert options, my server (again, not the same person from earlier) immediately recommends the Choco Co. Apparently it’s their best seller, so I give it a try. Two small chocolate cakes with a creamy Nutella and mascarpone center are topped off with coconut flakes and served with vanilla ice cream. The combination of mellow, chocolatey and nutty flavors is irresistible, and I polish the whole thing off in no time at all. It was definitely a solid recommendation. The atmosphere at Indie is an easy highlight, along with some foot tapping music. There are some great flavors at work here, though I’d love to see some more creative vegetarian options apart from the usual pasta dishes. While there was an odd glitch regarding my initial server, the overall experience goes rather smoothly. It’s a great place for a light meal, a few drinks and a relaxing evening.