Mixing it up at @blend

share Mixing it up at @blend on social media channels 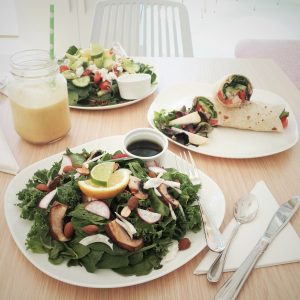 Opened just over a month ago at the Shoreline Beach Club in Palm Jumeirah, @blend is the latest in a growing crop of healthy cafes in Dubai. It’s a small operation for now, with head chef and manager Paul Pratik on hand to personally supervise operations and interact with customers. There’s a nice sense of intimacy to the setup, and in keeping the Beach Club theme, the décor is inspired by the ocean. Surf boards and life preservers with the words ‘Welcome Aboard’ are suspended from the ceiling, while the walls are done up in aquatic blue and decorated with ship steering wheels. While it is fairly quirky, it doesn’t quite bring to mind ‘blend’. The food at @blend mostly consists of salads along with a few healthy wraps, though there’s only one veggie wrap at present. They’ve also got a good variety of nutrition-packed smoothies. I try out the Greenometer, one of their most popular options, and the Guiltfree. The former lives up to its name with a mix of kale, avocado, green tea and kiwi among other green ingredients, while the latter is a combination of healthy fats including mango, avocado (again!) and coconut butter. They both have a nice fresh flavor and are quite filling all on their own. There is a choice of salad bases made up of various fruits and vegetables, and some customization in the dressings and any additional toppings. I opt for the Kale and Hardy, with kale, fennel and spinach, among others, and the Superfood Q, which includes a mix of red quinoa, avocado, cucumber and cherry tomatoes. The kale salad has a sharp and slightly bitter taste, complemented quite well by a citrus olive oil and balsamic vinegar dressing, and some crunch from roasted almonds added on top. The superfood salad has a slightly Mediterranean profile, so I opt for a herbed yogurt dressing and a sprinkling of feta cheese, giving the overall dish a rich, salty umami flavor. The filling of the veggie wrap includes Portobello mushrooms, brown rice, goat’s cheese and @blend’s special garlic hummus. The mushrooms and hummus dominate the wrap, giving it a good depth of flavor.  It would have been nice to have some other veggie wrap options, though.

For the sake of completion, I opt for dessert, which consists of chia pudding made with coconut milk and sprinkled with chopped strawberries. The pudding tastes nice, but isn’t too different from anything you could whip up at home. With an unusual name and a healthy, flavorful menu, @blend makes a good first impression. I like the customization options with the salad, and would like to see something similar for wraps as well. If you’re in the Palm Jumeirah area and on the lookout for a light meal, it’s worth checking out.

share Mixing it up at @blend on social media channels