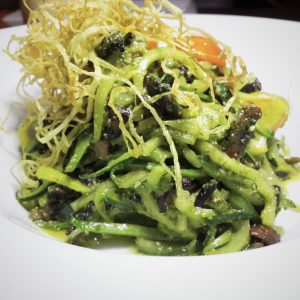 After a day at the office, it feels great to walk into a bar, especially one with a bit of personality to it. Tribeca, named after the New York neighborhood, has some playful touches to its décor, including graffiti on one wall, a bathtub full of ‘gin’ in one corner and pairs of sneakers tied together and hanging from overhead beams (a proud American college tradition). A big screen plays the movie Gangs of New York on a seemingly constant loop (the film reaches its conclusion toward the end of my meal and begins again as I’m heading out) and the décor is vibrant, with all manner of abstract artwork and New York-themed imagery. It also turns out that I’m dropping by on ‘Manday’, a weekly celebration of manliness that includes a love of meat, which makes me wonder if this was such a good idea in the first place. One look at the menu leaves me pleasantly surprised. About half the menu seems to consist of vegetarian dishes (and even some vegan ones!), sprinkled throughout the appetizers and the mains.

To start with, I order a bruschetta sampler, grilled halloumi with brioche and a superfood salad. Interestingly enough, the salad section of the menu is the one area where the vegetarian options are in short supply. The sampler consists of a trio of quinoa bruschetta, with toppings of sautéed mushrooms, chopped tomatoes and walnut tapenade. The fresh and earthy flavors of the tomatoes and mushrooms complement the quinoa bread quite nicely, but the tapenade proves to be a bit bland. I love the saltiness of the grilled halloumi in the second dish, along with the buttery flavor of the brioche and the slightly bitter element added by rocket leaves. However, it doesn’t feel like a cohesive dish; the individual flavor are nice, but don’t really come together. Maybe it might work better served as a salad. That point is further emphasized by the Superfood Salad, a mixture of kale, shredded carrots, avocado, chickpeas, tomatoes and wasabi peas that combines several strong flavors into a delicious whole. The bitter kale pairs nicely with the sweetness of the carrots, combined with some tang from the tomatoes and the rich avocado. The wasabi peas don’t make much of an impression in terms of flavor but they add a nice crunch to the dish. For the main courses, there’s ricotta gnocchi, beetroot mascarpone ravioli and zucchini noodles. The gnocchi, served with asparagus, broccoli and tomatoes, is just perfect. The pillowy pasta has a nice creaminess to it that’s balanced very well by the accompanying vegetables. While there a lot of sweet notes in the ravioli, thanks to the filling and the pea foam it’s served over, it gets an earthier complement in the form of sage butter, resulting in a mellow and pleasant dish. The zucchini noodles are served warm but still mostly raw, along with kale, chestnut mushrooms, tomatoes and macadamia nut pesto. This results in an abundance of earthy flavors and while it’s not bad, it does get a bit one-note after a while. A stronger nutty element or a sharper flavor like garlic might have helped to vary the flavor profile a bit. After a look through the dessert menu, I know one that I’d like to have for sure: Tiramisu with marsala. It’s been quite a while since I’ve had a boozy tiramisu, and it’s a hard one to pass up. Along with that, we order the organic molten chocolate cake with organic vanilla ice cream. The plating for this dessert is fun, as the ice cream is served in a bowl with an inverted waffle cone on top. It’s really hard to go wrong with a molten cake, and the one at Tribeca hits all the right notes. The tiramisu tastes nice if fairly unremarkable at first, but once you dig deep to get at the marsala-soaked biscuit at the bottom, the flavor really opens up. Tribeca’s laidback atmosphere and foot-tapping music choices make it a great spot for lovers of Dubai’s nightlife, but the menu pleasantly subverts all expectations of bar food. Not only is it veggie-friendly, many of the options are quite healthy! It helps to balance out the guilt you might feel from ordering that extra pint.