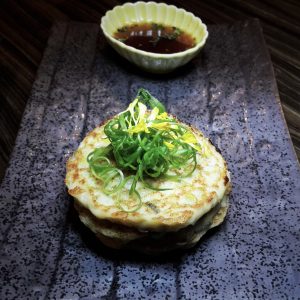 Okku has made quite a name for itself since opening its doors back in 2009. Sitting on the first floor of the H Hotel on Sheikh Zayed Road, Okku puts a contemporary spin on Japanese cuisine that’s known to be quite good. They’ve changed their menu up a bit recently, and I head there for lunch wondering if the food is still worth raving about.

After a walk through the gold-toned, brightly lit lobby of the H Hotel, entering the dimly lit Okku comes as a breath of fresh air. The restaurant is neatly divided into a bar and lounge on one side, separated by a ‘curtain’ of fairy lights from the restaurant on the other. Dark wooden tones add to the nocturnal atmosphere. There is a nice sense of intimacy to the setting of Okku, with a fairly compact lounge and dining room. I’m presented with a vegetarian menu on being seated, and I’m pleased to see there’s a decent assortment of sharing and larger plates on it.

The Seaweed Salad, consisting of Wakame seaweed with julienned beetroot and sesame seeds in a sesame-soy dressing, has a strong salty flavor. I don’t get much of the sesame though, which seems to be drowned out by the soy sauce and the seaweed. On a similar note, there’s the vegetarian Miso Soup. The usual earthy flavor of the soup is given a stronger salty note thanks to large chunks of wakame, which also add some more volume to the dish. From their maki selection, the Okku Kappa Miso consists of mixed vegetables, with a strong emphasis on avocado and asparagus, wrapped in paper thin cucumber slices. I had expected a standard vegetable maki, but there is a surprising amount of flavor here, and the cucumber skin on the wrapping adds a wonderful crunch.

The appetizers are rounded off with Shimeji Wasabi and Edamame Pancakes. Shimeji mushrooms are fried in a light tempura batter and coated with wasabi, resulting in a delicious dish that will definitely fire up your taste buds. The pancakes didn’t sound too exciting, and I was expecting them to be decent at best. This ends up becoming my favorite dish, though (with some tough competition from the Shimeji) with a savory flavor that has little hints of garlic and chili. Having gorged myself on appetizers, I decide to take it a little easier with the main course. The most popular vegetarian dish, and one recommended to me by my server and the manager, is the ‘O’ Style Avocado Kazan. The dish consists of a half avocado filled with a mixture of avocado flesh, chopped asparagus and two kinds of mushroom, all topped off with spicy mayonnaise and baked. The whole thing is set on fire as it’s served at the table, resulting in a fun little spectacle. Even diners from adjacent tables started asking me about it! The flavor is perfectly balanced, with a nice earthy undertone.

I enjoy the avocado with a side of truffle fried rice, one of their old classics.  The truffle flavor in the rice makes it quite addictive, and it complements the main dish quite well. For dessert, I get quite a few recommendations, including the Okku Chocolate Fondant and Chocolate Brownie. Feeling a bit ambitious, I decide to try them both! The fondant doesn’t disappoint, with a nice gooey chocolatey center, but it doesn’t really stand out compared to other fondants around town. What really makes this dish for me is the pistachio ice-cream served on the side, which is made in-house. It’s just delicious on its own, but when mixed with the chocolate, it’s spectacular. Apparently, the fondant is normally served with vanilla, and the pastry chef just happened to make pistachio on that day. In my opinion, it should be a regular accompaniment to the fondant.

The Chocolate Brownie is a work of decadent art, consisting of brownie pieces, whipped cream and ganache layered together in a martini glass and sprinkled with chocolate chips. Had I been aware of that beforehand, I would have stuck to just the one dessert! Of course, I can’t help having a few spoonfuls, but that proves to be more than enough. Don’t get me wrong, it’s an amazing dessert. Just make sure to have a light meal or to bring a really big appetite for this one. Okku puts together some great, vibrant flavors that make even the simplest dishes seem irresistible. Service is delivered with a smile and some humor, and there’s a good level of interaction between diners and guests. It’s a fine dining restaurant with the cheery atmosphere of a familiar neighborhood joint and some delicious veggie food.