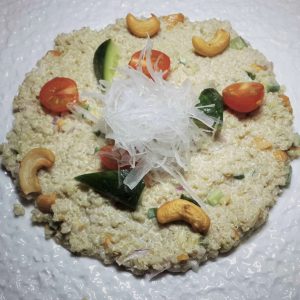 Though I have been to Meydan on a few occasions, I haven’t really had the opportunity to explore the restaurants there. I’ve heard good things about most of them, however, so when I’m invited to review Shiba, the signature Asian restaurant at the Meydan Hotel, I’m eager to check it out.

On a weeknight, Meydan isn’t really a hub of activity. As my dining companion and I make our way toward the hotel, there is a stark contrast between the glittering city behind me and the yawning darkness that engulfs the Nad Al Sheba area. The hotel is almost a beacon in the darkness, shining on through the night. Shiba is located at the far end of the hotel, which is a slightly longer walk than expected but it’s along one straight path so there’s no room for confusion. The restaurant itself is done up in deep red and brown tones that are evocative of the Far East. Like the hotel, it’s longer than it is deep, broken up into several small dining rooms and an open terrace. One end of the restaurant has a sushi counter while the other leads into a plush bar and lounge. Walking from one end of the restaurant to the other, you’ll encounter an open kitchen, a wine cellar and two private dining rooms designed in traditional Japanese style with low rectangular tables.

The menu is split between a Chinese and a Japanese section, with more vegetarian appetizers and side dishes than main courses. Still, there’s a decent enough spread for two, so we place our order, picking out a few dishes from each section. Wild Mushroom and Tofu Dumplings from the Chinese part of the menu start things off. The dumplings are served in a steamer basket with a trio of dipping sauces, which are, sadly, the best part of the dish. I don’t get any mushroom flavor from the dumplings at all, and they’re really quite bland.

They’re followed by Quinoa Salad SHIBA Style from the Japanese part of the menu. The quinoa has a very creamy texture and seems more like a risotto than any quinoa salad I’ve had before. Sesame oil gives it a nice nutty flavor, which is further intensified by chopped cashews, while chopped tomatoes and cucumbers add some freshness.  It’s pretty much the polar opposite of the dumplings and leaves me wanting more. Continuing with the Japanese side, we have Vegetarian Sushi Rolls and Avocado Maki. The maki is the better of the two, thanks to the fresh buttery flavor of the avocado, but they’re both fairly standard dishes.

We switch over to Chinese for the ‘side dish’ of Stir-Fried Tofu with Wild Mushrooms. I’m worried it might be a repeat of the bland dumpling filling, but thankfully, that’s not the case. The fried tofu has a pleasantly firm texture, and the combination of two kinds of mushrooms, bok choy and red chillies gives it a strong, spicy flavor. It is a full-fledged dish on its own, so I’m puzzled to see it listed as a side. We have it with Vegetable Fried Rice, which serves as a nice sponge for the spicy tofu. After that it’s back to Japan for the classic eggplant dish, Nasu Miso. It’s presented in the traditional way, as a roasted eggplant half topped with white miso paste. The smoky eggplant and slightly sweet miso have a more robust flavor than I’d expected, and the dish gets  polished off eagerly in spite of everything that came before it. For dessert, we pick one dish from each section. From the Japanese side, there’s Shiratama Zenzai, sweet red bean soup with mochi dumplings. It has an interesting flavor, with a very subdued sweetness, but it’s decent at best. The real finish comes from the Chinese side with a wonderfully creamy Mango Pudding. Coconut milk harmonizes nicely with the sweet mango and tapioca offsets the richness with a chewy texture. Given how much flavor the chefs at Shiba are able to bring to the few vegetarian dishes on offer, I really wish they had more of them. Due to the Meydan Hotel’s somewhat isolated location, it probably won’t be a regular dining spot for most people, but it is worth at least one visit for some tasty Asian food.