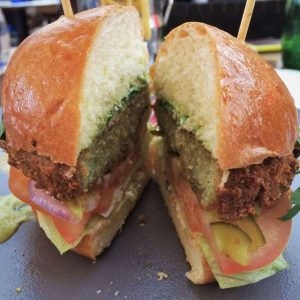 Celebrity chef Silvena Rowe has become something of a pioneer in Dubai since she moved here from London, championing the use of local produce and celebrating local cuisine. Omnia Baharat is the latest in her Omnia series of restaurants, and the first to be located in a mall. As with most mall restaurants, there isn’t much leeway with the venue’s design, but a striking mural depicting Arabic culture in bright bold colours, and a pink floral installation suspended from the ceiling manage to inject some personality into the space.

Baharat is an Arabic spice mix, and the name is made full use of in the restaurant. Burgers come topped with flags saying ‘I am your Baharat’, a slogan that’s also repeated in the staff’s t-shirts. On asking, we were told that it’s supposed to mean ‘I’m your spice’; a bit cheesy we thought, but makes for a good conversation starter!

There is a separate breakfast menu (which looked quite tempting, something we might like to come back for), and the main menu has a focus on burgers and seafood. There’s everything from pasta to biryani on the menu, which makes it a bit hard to work out the restaurant’s identity. The vegetarian options are limited, with hardly any veggie mains on offer. Given the focus on local produce and healthy eating that Chef Silvena is known for, this is quite disappointing. There are a lot of small bites and salads though, so we decided to share a few different things.

To start with, we chose the quinoa salad with onion jam dressing and a truffle mushroom soup with local mushrooms. The salad, tossed with baby lettuce, was light and quite nice, with a distinct cumin flavour in the dressing (we couldn’t really find the onion jam in there though). The soup was delicious – creamy and infused with a beautiful truffle flavour, with a cheesy oversized crouton swimming in the middle.

Next we tucked into the only vegetarian burger option, the falafel burger. The falafel patty was flavorful, but erred on the side of being a bit too crispy. The brioche bun it came encased in, however, was excellent. With a touch of the homemade hummus that replaces mayo in this Arabesque version of a burger, it was good enough to eat by itself! The shoestring fries that we ordered on the side were triple cooked in olive oil. As a result, they were irresistible (what fried potato dish isn’t anyway?), though not as crispy as we’d have liked.

It’s on the dessert front that Chef Silvena is known to shine, with her range of gluten-free and vegan delicacies, so our expectations were high. The velvet vanilla cheesecake, with a gluten-free base, tasted overly milky.  I’d have expected to see it flecked through with fresh vanilla beans, but there were hardly any to be found or tasted. Our other dessert was a Nutella style Sheikha – the Sheikha being an in-house creation that is gluten-free, paleo and vegan. A chocoholic’s delight, it is basically a chocolate and hazelnut crust filled with ganache. Served with tart red currants to offset the rich chocolate goodness, it was delicious. Both desserts were presented beautifully.

A note on the service - we found it to be inconsistent, to the point of being annoying. Early in the meal, the staff hovered around and offered to clear our tables of dishes that we had barely taken a bite out of! Later on, we struggled to get their attention when we needed it. As mall restaurants go, it is good to have brands now where you can find healthy and fresh food as an alternative to typical food court offerings. But for Omnia to compete with other restaurants in its league, it needs to fine-tune its offerings. Presently, it feels a bit like it’s trying to be everything to everyone. It isn’t trying to be veggie-friendly though, so I wouldn’t recommend coming here if you’re a vegetarian looking for a great meal. If you’re just looking to grab some bites when out with friends, you can find something to suit you here.