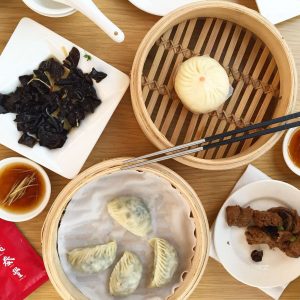 Din Tai Fung is a Taiwanese restaurant chain with branches all over the world, from Hong Kong and Singapore to Los Angeles. Since its humble inception in Taipei during the 1980’s, it has acquired something of a cult status, and a couple of Michelin stars along the way.

Not surprisingly then, its opening at the Mall of the Emirates’ new extension generated much hype among Dubai residents, and led to long queues shortly after its opening.  The dining area spills into the wide corridors of the mall, and the tables are closely packed together.  The décor is contemporary with some token Chinese paintings along the inside wall, and an open kitchen. The space is flooded with sunlight thanks to the overhead atrium of the mall, making it feel bright and welcoming.

Even at lunchtime on a weekday, it was busy and involved waiting. As such, our expectations were high! Unfortunately for us, however, their iconic dish Xiaolongbao (soup-filled dumplings) doesn’t have a vegetarian option, so we had to make do with what there was in terms of vegetarian food. And it wasn’t a lot. The menu is sharing-style, so we just selected a bunch of different things, basically working our way through most of the veg dishes on offer! Once our order was taken, the food started coming out thick and fast.

The spicy cucumber, which consisted of quarters of cooling cucumber doused in a sweet and spicy sauce, made for a refreshing start. The Chinese black mushroom salad was also a cold starter, and offered an interesting textural experience. It was gently rubbery and moreish, with a dressing not dissimilar to the cucumber.

The bean curd puffs ended up surprising us. The dish looked quite unappealing, with rough chunks of tofu, or bean curd, that were mixed with wheat flour and deep fried. To our surprise it actually tasted much better than expected, with sweet spongy mouthfuls that were quite similar to fried bread desserts.

The only vegetarian dumplings on offer were the steamed mushroom and vegetable dumplings, served in bamboo baskets. They turned out to be doughy, and the filling quite bland, so they can be described as mediocre at best. We also had a steamed bun, which had the exact same filling as the dumpling, with an equally disappointing taste. Had we been informed of that when ordering, we would probably have skipped it or picked something else. For mains, our options were sautéed spinach with bean curd, and sautéed kang kong (more popularly known as morning glory or water spinach). We ordered the latter option in the name of authenticity. Although it had been tossed in a garlicky base, the flavour was quite unremarkable.  In all honesty, you could find a better dish of sautéed greens in your friendly neighbourhood Asian takeaway joint. The egg fried rice, which came topped with crispy garlic, had more flavour, but was still nothing special.

This standard extends to the service as well, which they are supposed to be known for, but we found disappointing. For example, communication was a hurdle with the Chinese waitress. It’s great to find authenticity among wait staff too, but when in an international outpost, basic language issues really shouldn’t happen. And between the few different people serving us, they managed to forget one dish from our initial order. Overall, that was what the whole meal felt like – not unpleasant, but probably not worth trekking out for. Admittedly, some of the other veggie dishes (tomato and tofu egg flower soup or red bean bun, for example) might have been interesting, but this menu wasn’t devised with vegetarians in mind. Din Tai Fung may well do excellent soup dumplings and that’s probably what people line up for, but a vegetarian diner can do much better for themselves going elsewhere, or getting their Asian fix from their regular restaurant.