Keeping it raw at BeStro

share Keeping it raw at BeStro on social media channels 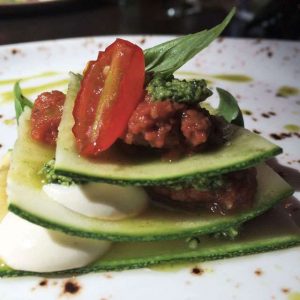 The back-story of how this little café, tucked inside Lafayette Gourmet in The Dubai Mall, came to be is almost as interesting as the food. Founder and chef Hayley Mac turned her back on her fast paced, glamorous life as an event manager to become a raw and superfood warrior when she saw the effect it had on her own health. She was one of the pioneers of the superfood movement here in Dubai (if you can call it that) with her Be Supernatural brand. At first she’d approached Galeries Lafayette for retail space for her health food products. As the idea was still very new, they asked her to create some dishes for them to sample using her products. On tasting, the powers-that-be offered her the café area to take over and run, instead of just some shelf space. It was two years ago that she opened Dubai’s first vegan, raw food café; the rest, as they say, is history.

If that is the effect the food had on the French managers, I was curious to see how I would react to it. I’ve enjoyed my experiences with the raw food diet before and I know it can be delicious.

The compact café is essentially a counter with banquette style seats and a few tables in one end of the Lafayette Gourmet food hall. Everything on the menu is made from scratch and is vegetarian and free from dairy, sugar, gluten and chemicals. My friend and I opted to share a few different dishes so we could try as much as possible.  There aren’t any separate starters or mains, but they do smaller portions of any dish you want. We started with the recommended drink of ‘thai-roo’ (their entire drinks menu is quirkily titled), a green juice of pineapple, kale, lime, coriander and lucuma. It was so delicious and refreshing that I promptly necked it and proceeded to order another one, almost ignoring our other drink order – a richer kulfi nut milk made with spiced coconut and almond milk that was also nice, but very different. Off to a good start! Our first dish of heirloom tomato and red pepper pizza breads was more of a bruschetta than a pizza, with dots of homemade pesto, cashew cheese and fresh cherry tomatoes on a flaxseed crispbread base; it was utterly moreish. Next, I tried the lasagna – in this raw food version, it is layered zucchini with sundried tomato pesto, cashew cheese, garnished with fresh basil and basil oil.  Light and fresh, it echoed the Mediterranean-esque flavours of the earlier dish. The burrito-like onion vegetable wrap was filling and delicious. The sweet onion and flaxseed wrapping itself was packed with flavour, and was only enhanced by the mushroom, lettuce, cucumber and capsicum stuffing, plus sauerkraut, vegan mayo and harissa. Sauerkraut also made an appearance in the ‘shrooms and slaw accompaniment, a Portobello mushroom with sauerkraut stuffing, and coleslaw. By now we were both quite full, but the spicy pear tagine with olive and parsley couscous came highly recommended, so we gave that a go as well.  This dish is served warm (raw food allows for gentle cooking at very low temperatures, which was done in a dehydrator in this case), with a powdery, parsley-garnished cauliflower couscous serving as the base for a mélange of pear and zucchini coated in a Morroccan-style sauce. The sweet and savoury flavours were so perfectly balanced that we managed to polish this off too.

Dessert options change daily; we opted to share the lemon sherbet cheesecake.  While the texture was spot on, the lemon curd-like taste was a bit too sharp for my liking, but the homemade vanilla bean ice cream it was served with, set it off perfectly. I hadn’t expected to walk out feeling as full as I did (blame it on my over-ordering!), but nonetheless, I wasn’t uncomfortably stuffed, and still felt light and healthy. With the unexpected flavours in each dish, the friendly service, the high quality of the ingredients, and the value-for-money pricing, I’m sure I’ll be coming back here for lunch dates quite often! The café also has a retail space selling their own-brand health food products.

share Keeping it raw at BeStro on social media channels