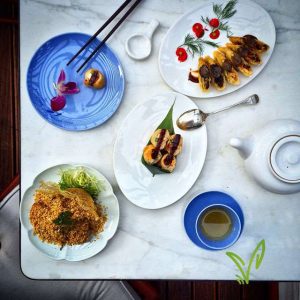 I always thought of Hakkasan as a place with delicious food, fabulous cocktails and an awesome looking bar. Despite having this formula, it was never really on my list of regular places to frequent. Having been there on a few occasions over the last couple of years, I always felt that their customer service needed improvement. But when a friend suggested we plan a girls night out there last week, I went along with it, as I was keen to try some of the signature dishes on their Chinese New Year menu. As an added bonus, their strawberry basil martini is one of my favourite cocktails! Three of us were vegetarians, and as with most Asian restaurants, everything was sharing style, so our fourth friend decided to stick with vegetarian options as well. This gave us the chance to sample quite few dishes, which we ordered from both the regular and Chinese New Year menus.

The fact that 5 of the 7 dishes listed on the Chinese New Menu had a (v) next to them brought a smile to my face. In fact, the regular a la carte menu also has a good number of vegetarian dishes. While we normally would have quickly identified the (v)’s and ordered most of them, this time we were actually spoilt for choice! However, since my attempt at asking the waiter for his suggestions didn’t really accomplish much, we decided to settle for the following: The first dish to arrive was the vegetarian black truffle lupin roll. The crispy exterior of the rolls were loaded with vegetables, black truffles and a creamy truffle sauce, and were devoured within minutes. We loved them so much that we ordered a second round straight away, even though we hadn’t tried anything else yet! Next to arrive were the Vegetarian mooli puffs, consisting of a delectable pastry filled with a creamy radish filling, which were just perfect along with the sweet and sour dipping sauce served on the side. We were all trying to figure out which component of the Fried pumpkin, tofu and aubergine dish was which, thus we were definitely intrigued by this one! The best part were the crispy oats, which had a wonderful crunch and lovely garlic flavour. The Fried bamboo pith roll had a nice soft texture, almost like a Chinese version of a sushi roll using pith instead of rice, which was delicious with the black bean sauce topping. Our favourite starters were all specials from the Chinese New Year menu, so I really hope they decide to retain some of them on their regular menu! For mains, the Stir-fry lily bulb was a tasty dish, however we preferred the options on the regular menu, all of which arrived at the same time. We were served the Edamame and egg fried rice in small bowls and the other two dishes were placed in the middle. The sauce of the Stir-fry lotus root and asparagus had just the right amount of black pepper; in fact, I found myself adding just the sauce over the rice towards the end. As always, I really enjoyed the Tofu, aubergine and shiitake mushroom claypot, which I always order at Hakkasan. The chilli black bean sauce perfectly complemented the braised vegetables.  Click here for the recipe! Being a girls night out, we had ordered 2 rounds of drinks, so decided not to indulge in dessert this time around, but please do comment below on your dessert favourites!