An Evening Fiesta at Rosa Mexicano 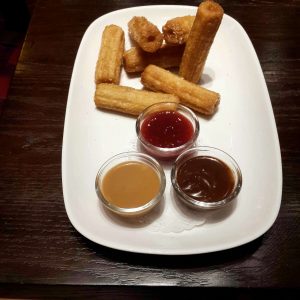 Growing up in Dubai, I’ve seen a few Mexican restaurants pop up around town, only to disappear a short while later.  That’s started to change in the last few years though, as some restaurants have managed to stick around. One of the newer additions to Dubai’s Mexican food scene is Rosa Mexicano, an American import that made its debut here two years ago with branches in the Dubai Mall and Mirdif City Centre.  VeggieBuzz has been invited to review the restaurant for its vegetarian food, so I visit the Dubai Mall outlet with my brother. The interior certainly lives up to the name. ‘Rosa’ is Spanish for pink, and there are liberal splashes of the color in every aspect of the restaurant’s decor. It gives the space a warm and cheery vibe.  There’s a waterfall running down the back wall covered in little figurines mimicking the mall’s famous ‘Angel Fountain’. Sombreros and ponchos lay strewn on a table on one side of the room, next to a desert backdrop. It’s a fun touch, letting diners play dress up and have their picture taken, but seems slightly at odds with the otherwise elegant look of the restaurant.

The menu is mostly focused on grilled chicken and steak, though there are a handful of vegetarian dishes, and the option to substitute vegetables in some of the meat dishes. Our server immediately highlights the Guacamole en Molcajete, a signature dish at the restaurant, which we gladly order, and an order of Crispy Jalapeños. While we pore over the main courses, our server wheels out a cart with all the guacamole ingredients on it and proceeds to walk us through the preparation of the dip. Tableside guacamole preparation seems to have become a staple at every Mexican restaurant now. It’s no longer the spectacle it was the first time I saw it, but I appreciate our server’s skill and enthusiasm, and the result is delicious. The guacamole is accompanied by crisp tortilla chips, served alongside a tangy tomatillo salsa that’s on the mild side. There’s also a little heat in the Crispy Jalapeños, balanced out by gooey melted cheese and a crunchy breaded coating.

For our main courses, we have the Burrito con Pollo (with veggies swapped in for chicken) and Vegetable Fajitas. There are a lot of similarities between both dishes, and the fajita essentially comes across as a deconstructed burrito. Both have a common filling of spinach, corn, mushrooms and onions. The only flavor distinction between them is that the burrito has black olives and tomatoes while the fajita has green bell peppers. Shredded cheese, sour cream and Mexican rice are other common elements between them. The fajita has additional accompaniments of guacamole and a refried bean puree, and the burrito comes with a side of highly addictive seasoned fries. Overall, everything tastes quite good. There’s a little sweetness from the corn and some bitterness from the spinach, and they both manage to stand out against the vibrant mix of flavors. My one complaint is that the two dishes don’t taste distinct enough. It almost feels like we ordered two of the same dish.  Perhaps the veggie enchilada might have been a little different, but based on its description on the menu, it appeared to be just cheese in a tortilla, which sounded quite plain.

For dessert, we have Churros en Bolsa, which is a Mexican classic, and Tres Leches de Zarzamoras. The churros are served in a bright pink paper bag, echoing the theme of the restaurant and making for a fun presentation. Our server explains that the bag contains cinnamon sugar along with the churros. He picks up the bag and gives it a hearty shake to distribute the sugar evenly over the fritters, then pours them on the plate. The churros are warm and crisp, and not overly sweet in spite of the sugary coating. They come with a trio of dipping sauces: chocolate, caramel and strawberry. All are nice, but I think the caramel is the pick of the lot. I’ve only had Tres Leches once before, at Maria Bonita in Jumeirah. I remember it being a wonderfully moist and almost creamy cake. This Tres Leches is comparatively dry, and the tartness from the blackberry sauce is a bit overpowering. I really would have liked the flavor of the cake to stand on its own. Perhaps it would be better to have the berries as an optional component rather than as a main element of the dish.

Rosa Mexicano creates a festive and colorful atmosphere with food that’s equally colorful. Unfortunately, the flavors in the main courses are a bit monotonous. The dishes are just a variation on the same vegetable mix stuffed in a tortilla and presented a bit differently. Dishes such as Chile Rellenos and cauliflower tacos, found on their US menus, would help add variety and show that Mexican vegetarian cuisine is about more than just corn and beans.