Bertin Bistro Dubai | If you snooze you lose!

share Bertin Bistro Dubai | If you snooze you lose! on social media channels 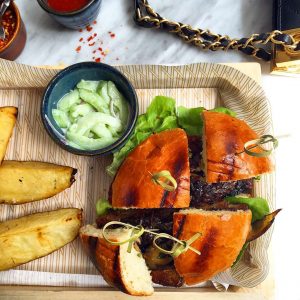 According to the story mapped out on the walls of the restaurant (which, in case you were wondering, is based on truth), it was love at first sight for Bertin the minute Selena walked through the doors of his family bakery in Alsace. But for Selena, it was only love at first bite of the Pain Perdu, for which she returned every single day for a whole month. So instead of mustering up the courage to talk to her, Chef Bertin went through great lengths to perfect its recipe, but as the story on the menu reads, he ended up missing his chance with her. I kind of wish he had just talked to her, but I’ll happily settle for the delicious pain perdu. ;) Bertin is a recently opened Bistro and restaurant in Manara, which serves French Bistro style cuisine on the ground level, and a mix of Moroccan and Spanish dishes including hot and cold tapas on the first floor, where they also serve sheesha. The Bistro has an old European vibe, with exposed ceiling ducts, pipes and fans, and a coffee bar in the corner with dark wood paneling and green leather cushioned barstools. The shisha area upstairs is similar, but has more of an Arabian feel, with lounge style seating and colourful cushions. Many of the popular dishes, like the Flammekueche (an oven baked flat bread with various toppings), a few other baked savouries and mains, as well as all the desserts, are common to both floors. Since I was invited to sample some of their vegetarian dishes, myself and my 2 dining partners were seated in the Bistro downstairs, but still got to try food from both menus. We started with the Gratinee Flammekueche, a twist on an old family recipe, served straight out of the oven. The cream cheese spread over the thin flatbread, with just a sprinkle of a mild but savory Emmental, was topped with onions and mushrooms. It was a nice light bite to start things off, though we would have like the flatbread to have been a little crispier.

Now quinoa and lentils are really popular salads at restaurants in Dubai, so you’ve got to really distinguish yourself from the rest to stand out. And I must say, the lentil salad really succeeded at this with the pungent zest of kumquats, crunchy pomegranates and pickled snow peas (prepared without the crab). The quinoa salad was made in a similar fashion, but somehow it didn’t work as well as the lentils. We also got a chance to sample Bertin’s lentil dip, a Moroccan inspired cold tapas dish, which is definitely not something I’ve come across in Dubai yet. It was delicious and was a perfect accompaniment to dip their freshly baked bread into. The quinoa burger was by far the favorite at the table. The quinoa and nut patty, roasted to perfection with mild spices, has a nice crisp exterior, but gets softer as you bite towards the center. The bun comes with tomatoes, caramelized onions and mushrooms, which add just the right amount of moistness to the sandwich. The vegetable couscous tagine from the menu upstairs was served next, which consisted of vegetables, caramelized onions and nuts cooked in a mild curry sauce, and served over a bed of couscous. This was a delicious, comforting dish that was served nice and hot –it tasted just fine as served, but we chose to up the spice factor with some chili flakes.

The last savory dish to arrive was the spinach and ricotta lasagne, which had just the right proportions of ricotta, spinach, tomato sauce, and a touch of Parmesan cream, making for a wholesome and delicious vegetarian pasta dish.

Last but not least, the pain perdu was divine, not surprising considering how much love went into perfecting its recipe. I love the fact that the bread pudding itself is slightly on the savoury side, with the sweetness level left completely under your control with the caramel and sea salt accompaniments, to be added to your heart’s desire. It was a bittersweet ending to a delicious vegetarian feast. Bertin delivers some fantastic flavors that will have you coming back for more, the same way Selena came back for the pain perdu. So as we’ve learned from Chef Bertin’s story – if you snooze, you lose!

GRASSY SUMMARY
Veggie Friendly: Yes  Vegan Friendly: No
Pros: Delicious and wholesome selection of vegetarian options, which is quite extensive.
Cons: The concept can be a little confusing at first.

share Bertin Bistro Dubai | If you snooze you lose! on social media channels