The Veggie “Catch” of the Day | Catch Dubai 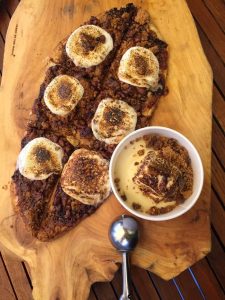 It all started when the Catch Dubai account followed me on Instagram. My first reaction was why is this seafood restaurant following me? I guess they will unfollow me soon enough, once they figure out I am veggie. Strangely enough, a couple of weeks later I was invited for a review! So of course, I mentioned that I was vegetarian and would not be the best person to target, but they still pursued it. I graciously accepted the invite, having pretty low expectations about the food. Having visited the NYC restaurant a couple of years ago for drinks, I do remember it being mostly about the seafood, but at that time (before I started blogging) I didn’t really check how veggie friendly it was. However, what I do remember loving, was the vibe and buzz about the place.

As I walked into the Dubai restaurant, I took in its fascinating, trendy interiors. The wide brass colored columns, the combination of dark wood and black and white zig zagged tile floors, the hanging lanterns and the exposed black painted pipes and ducts on the ceiling, all worked together to create a quirky fun feeling. It almost felt like I was transported out of Dubai and right back into New York City. The fact that each and every hostess, server, manager and runner seemed genuinely interested in making sure I was having a great time definitely added to this. And having a great time I was, even though I hadn’t even looked at the menu yet. I browsed through it as I was waiting for my dining companions to arrive, and noticed a couple of salads, a vegetable roll, an appetizer, a main course and a couple of sides. My first impression was that it wasn’t a massive variety, but definitely enough for 1 or 2 vegetarians dining together. There were 3 of us, so I just went ahead and ordered most of them, and my 2 friends added a little bit of fish, seafood and a meat dish to the mix.

Here’s my run down of the veggie dishes:

The vegetable roll was the first to arrive and was filled with mango, cucumber, avocado, rocket greens, a root vegetable called yama gobu and seasoned with a sweet chilli miso and coated with sesame seeds – overall a fantastic flavor and texture combination that was perfect when dipped in soy sauce with just a dash of wasabi. Much better than your average vegetable maki roll.

The cabbage salad tasted fresh and crisp and the plum vinaigrette was light and flavorful. It was good, but nothing spectacular.  I am not sure if I would order it again.

The Beet Salad was served with the greens in the middle, sprinkled with candied walnuts, surrounded by chunks of marinated red and yellow beetroot, along with dots of goat cheese foam and 2 kinds of beetroot foam, which I wiped clean as they were just explosions of deliciously tangy flavor. The Tempura Shoshito Peppers were highly addictive and I couldn’t help but continue munching on them as I sipped on my crisp Chardonnay from Washington State, while waiting for the mains to arrive. They arrived soon enough, including a generous serving of creamy mushroom spaghetti with sugar snap peas, tomatoes, truffle oil, Parmesan and another ingredient that was adding some serious umami, but I couldn’t quite put my finger on it. On inquiry, the Executive Chef was sent out to answer the question himself. And believe it or not, it was soy sauce! I would have never guessed soy sauce would work in a dish like this, but it sure was delicious! Chef Bobby Griffing proudly explained that the menu at Catch NYC was also recently changed to include this new recipe that he created.

The Corn and Edamame Succotash was brought out on the side, which is usually served with an eel broth, but can be substituted with a vegetarian broth. They accidentally forget to implement this change, which I noticed when I detected a slightly fishy taste. Thankfully, I am not that particular about broths, so it was a minor mishap and did not detract much from my overall experience. Note to self: emphasize more on the substitution when placing the order next time.

On to dessert – I could have happily skipped it, but one of my friends was adamant on trying the “Hit Me” Chocolate Cake, and we were advised by our server that it was a large sharing portion, so we ordered one for the table. It consisted of thick square layers of devil’s food cake, roasted white chocolate ice cream, a brownie and a liquid “klondonite” as the top layer. This 4-layer cake had the words “Hit Me” written on the plate with chocolate sauce, and some more steaming chocolate sauce was poured over it before us. We had to then take a spoon and smash the top of it, creating an explosion of a white chocolate from the top layer. A fun little experience and a rich, indulgent dessert to follow it. Will I be back? Most certainly – the vibe of the place just makes me so happy. I suppose your mood has a lot to do with how much you enjoy food, so perhaps that might be why this review is so good – but isn’t the idea to have an amazing overall experience? I certainly think so!

P.S. For the meat and seafood lovers reading this, my friends were raving about their food as well