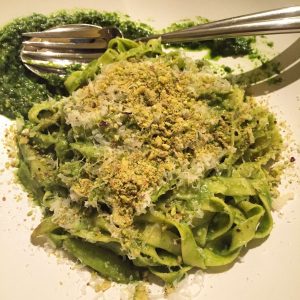 The opening of Jean Georges Dubai as been long anticipated by many a Dubai foodie, especially me! So the minute I heard the restaurant was taking reservations, I booked a Friday family dinner during their opening weekend. Four veggie foodies, and I didn’t even bother to check whether there was enough vegetarian food on the menu. Having been to several of Jean Georges’ restaurants in New York, my earliest memory being as far back as 15 years ago, I knew there would be nothing to worry about.

Cars were backed up at The Restaurant Village at the Four Seasons Resort on Friday night, which is understandable given that it also houses 2 other great restaurants and a nightclub. Definitely one of the new trendy locations for Dubai’s well heeled to see and be seen!

There are two Jean Georges restaurants within the same space, separated by a bar with a beautiful marble countertop – the more formal JG Dining Room and the supposedly casual JG Kitchen. As we were escorted to our table at JG Kitchen, I took in the large, but impressive restaurant, which was brightly lit, packed with a trendy crowd, and far from casual!

The menu, of course, had plenty of vegetarian options, so much so that we were spoilt for choice! We settled 3 items from the market table, a couple of salads, a pizza, a pasta and a couple of sides to share, but there was still plenty more on the menu that we didn’t get to order!

Here’s a run down of the food:

The Roasted Eggplant toast with marinated peppers was like a long bruschetta cut into 4 slices. I could taste the peppers more than the eggplant and it was slightly on the oily side, but a decent start overall.

Next was the white bean hummus served with some straightforward grilled veggies on skewers and warm pieces of pita bread. This was a tasty appetizer, but nothing out of the ordinary.

The chopped market greens and vegetables served with ricotta and red wine vinaigrette was definitely the best of the appetizers, both visually and in taste. It included red and yellow beetroot, edamame, sweetened orange and lemon zest, cherry tomatoes and greens. The tastes that resulted were a delicious combination of sweetness, tartness, freshness and light bitterness. The Burrata was nice and soft, and topped with a lemon Sorrento jam, and surrounded by a few slices of fresh lemon; there was a nice contrast between the sweet jam and the sourness of the lemon slices, a perfect summer dish served with some much needed sourdough toast on the side.

The black truffle and fontina pizza, topped with a touch of Frissée (jagged, light colored bitter greens) was by far the favorite dish on the table, where the ingredients speak for themselves. It actually arrived while I went for a restroom break and by the time I got back a couple of minutes later, the rest of my family had already polished off their slices, leaving just the one last perfectly baked slice on my plate! The Fettuccine with basil-pistachio pesto served with asparagus, peas and Parmesan was also delicious; it was just like a traditional pesto with a slight pistachio flavor, and an added salty crunch from the crushed pistachio.

We also had 2 sides of grilled asparagus and assorted spring peas, which were both simple, fresh dishes.

We ordered just 2 desserts to share, but 2 more were brought out on the house, which made for an indulgent ending for the four of us. The salted caramel ice cream sundae with caramel pop corn conjured up a sweet image of the first time I tried this dessert at ABC Kitchen NYC a few years ago.

The fluffy tres leches and was topped with a delicious cherry meringue and served with some raspberries in syrup, and the blueberry lemon tart was a moist, soft, lemony sponge which was delicious, but would be more appropriate for a post lunch treat with a nice strong coffee.

We also ordered a cookie plate, consisting of 3 yummy cookies which I barely had any room for.

Overall the food was simple, yet fresh and delicious, with little touches of JGV creativity here and there. I am going back to try the JG dining room this week, so hope to report back with my experience soon!