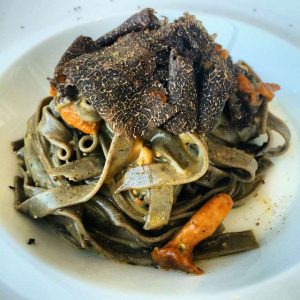 Having visited the former Vu’s restaurant for lunch on a couple of occasions, mainly for the view rather than the food, this was my first visit back since its re-launch as Alta Badia, which is on the 50th floor of Jumeirah Emirates Towers.

Named after a ski resort in northern Italy known for its gourmet cuisine, the name of the restaurant is definitely representative of the food on offer. Having worked at a Michelin star restaurant for over 7 years, Executive Chef Claudio Melis has done his part in improving the food and the vegetarian selection on offer.

The décor is much the same as the former Vu’s restaurant; I found the minimalism to be appropriate as it keeps your attention on the conversation and the fabulous view.

While the restaurant doesn’t have a dedicated a sommelier, the maître d’ did a good job of making sure the wine was handled and served properly. On this particular occasion, I had the pleasure of dining with some real wine connoisseurs, my father being one of them, and I could see everyone’s nods of approval when the maître d’ rinsed the glass with a small pour of the ultra luxury wine we were about to enjoy. Our waiter was friendly, accommodating and quite knowledgeable about the menu. As we had a look through the business lunch menu, my father and I mentioned that we were vegetarian. As a result, we were immediately offered the regular à la carte menu, which gave us a few more options to choose from. A tick on our veggie friendly checkbox! The high quality of the burrata was apparent in its taste, thus this dish was by far the favourite of the appetizers. I could taste of hint of green pea in the pesto, which, together with the almost dried cherry tomatoes, added another dimension. I didn’t particularly like my Parmesan pudding, as I could taste the egg more than the Parmesan flavours as opposed to vice-versa, which I would have much preferred. I also had a taste of my father’s soup, which did not disappoint as its mildly creamy texture allowed its pea flavour to shine through generously. I also had a taste of our guest’s Risotto al Pecorino, acreamy Tuscan pecorino cheese risotto with Norcia black truffle, and although the mushrooms were pleasantly seasoned, I found the dish to be overly creamy and lacking in flavour.

I ordered the Doppio Raviolo for my main course, which consisted of eggplant, mozzarella, ricotta and tomato, served with basil butter and crispy eggplant. My father ordered the Tagliatelle di Farina Bruciata, a burnt flour Tagliatelle with wild mushrooms and Norcia black truffle, and we ended up sharing both. The filling of the ravioli was more of an eggplant puree with just a touch of cheese, creating a perfectly smooth texture that boasted outstanding flavours. Needless to say it was polished off pretty quickly! The truffle linguini was quite good, but it was one of those dishes that wouldn’t have been satisfying on its own, so it’s a good thing we were sharing both!

By the time we got to dessert, we didn’t have much room, so we decided to order just the Chocolate Caramel Lava Cake with Grand Marnier ice cream for the table. You know a lava cake is good when you can’t stop eating it until the last morsel, and that’s precisely what we did. The caramel centre also had hints of Grand Marnier flavour, which completely took the dessert to a step above your average lava cake – just divine! We concluded with coffee and petit fours consisting of sugar coated fruit jellies, a perfect finish.

My only complaint would be that the waiters weren’t so diligent about topping up our water glasses, and we had to constantly ask them for refills. Eventually I got tired of this and moved the bottle from the ice bucket onto our table, so that we could refill it ourselves. This was a minor issue, which didn’t really detract much from the experience, so I would definitely go back again, particularly for the ravioli and dessert!