Guinea Pigs at Indego by Vineet 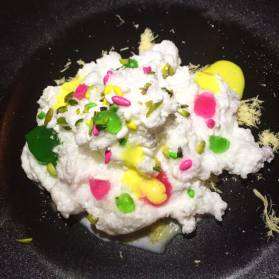 Going out for a high end North Indian meal in Dubai typically goes hand in hand with a food coma. As tasty as it is, it’s almost always heavy. Thus after trying Indian restaurants once or twice, I’m not typically a regular customer. Indego by Vineet has always been an exception to this rule, as I do go there more regularly than the other restaurants.

I love the simplicity of the décor at Indego – the dining room uses deep red accents to add a touch of brightness, and the minimalism helps to highlight the beautiful bronze statues of Nataraja (a dancing Indian idol), that divide up the space. The service has also always been on point; each and every server knows exactly what they are talking about, so much so that when you inquire about an ingredient in a dish, they always have an answer for you. Pic courtesy of Indego by Vineet

In the last couple of years, there have been a lot more additions to the high end Indian dining scene in Dubai, many of which we have reviewed. Thus we figured it was time for us to put together a roundup of our favorites, and of course, Indego by Vineet had to have a spot on our list!

On a recent visit to the restaurant, we get a chance to be guinea pigs for Chef Vineet Bhatia’s upcoming vegetarian tasting menu, which he will be launching in the next couple of weeks. Here’s a quick rundown of the meal.

Goat Cheese Samosas with Cashew Nuts:
They’re served on a bed of sun-dried tomatoes and olives, and surrounded by a lentil soup that tastes quite Mediterranean. The samosas are quite tiny, getting some depth from the smoked goat cheese and cashews. It’s a relatively healthy and light start to the meal. Stuffed Aubergine:
A thin slice of aubergine is rolled around a filling of soft cheese, yogurt and saffron. This is served alongside aubergine pakoras (fritters) with tomato chutney, tamarind chutney and a dill flavored mint yogurt.

Almond Tikki (cutlet):
The almond tikki (cutlet) is served on top of a creamy channa masala (chickpea curry) and topped with a dollop of tamarind sorbet. The tikki has an interesting texture, with almond pieces in it, but it’s very crumbly. The channa masala underneath has a nice rich flavor, but the sorbet is a bit on the sweet side. Pumpkin Sheesh Kebabs:
This dish consists of kebabs that are savory and spicy. There’s no sweetness at all, which you’d normally expect from pumpkin, so that’s a nice surprise for the palate. They are served with mango chutney, which adds a sweet flavor, as well as a tzatziki-like hung yogurt. There are also mini zucchini pancakes on the side, but they aren’t very good.

Malai Broccoli:
The broccoli is served on a bed aloo chaat (spiced potato cubes) and boondi (mini gram dumplings). Both the broccoli and the potato have a smoky, spicy flavor. They’re also quite tender, but the tangy boondi adds some much needed crunch. Passion Fruit Sorbet:
A palate cleanser is just what I need as I can feel myself slipping into a food coma.

Mango Moyli:
This dish is like a mango soup with a very earthy flavor. It’s accompanied by Chettinad (South Indian style) mushrooms, fried in a pungent spice mix. Sitting on top is a pouch of crispy fried dough stuffed with a green pea mixture that also has mushrooms in it. The soup is good, but there’s too much cardamom in the stuffing, which is quite overpowering and hard to chew.

Daulat ki Chaat:
This is a classic street food that’s served in northern India during the winter. It consists of a fluffy, frothy milk-based mixture, served with drops of rose and green mint gel, along with sugar coated fennel seeds and soan papdi (a flaky, crispy Indian sweet). It looks like a huge portion on the plate, but is actually quite light and tastes absolutely divine. I’m not usually a fan of soan papdi, but I think it works really well here. Sticky Toffee Pudding:
The pudding is made with khoya, mawa (both dried milk-based), dates and masala chai (spiced tea). It’s served with a toffee sauce, gajar ka halwa (carrot pudding) and caramelized banana ice cream. It’s a fantastic dish, and I love the masala chai flavor in the pudding.

Indego by Vineet showcases Chef Vineet Bhatia’s concept of evolved Indian food with an innovative mix of flavors and some unique ideas. I think the appetizers are much better than the main course, but it’s still an amazing experience.

Click here to read my interview with Chef Vineet Bhatia!