An evening at Ashiana by Vineet

share An evening at Ashiana by Vineet on social media channels 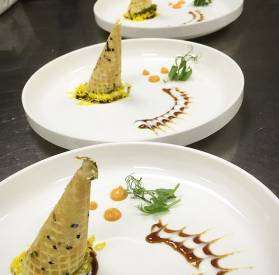 As the world’s first Michelin starred Indian chef-restaurateur, Vineet Bhatia has made his mark worldwide, and of course Dubai is no exception to that rule. Indego by Vineet has been around for quite some time, and was recently joined by Ashiana at the Sheraton Creek Hotel, which has been revamped by Chef Bhatia’s skilled hands.

The restaurant is located on the mezzanine lobby area, with a façade modeled after a traditional sand-colored Indian fort. The interior creates a warm, cozy environment that’s accentuated by liberal use of dark wood furniture, earthy colors and warm diffuse lighting. We start off with an amuse bouche of a potato and coconut dumpling sitting atop a spicy coconut chutney. The dumpling has an unbelievably soft and smooth texture on the inside and its relatively mild flavor mixes very well with the spice from the chutney. It’s an interesting take on an Indian street food staple, and has our appetites suitably whetted.

For the appetizer, we order the Subz Platter, which consists of a quartet of grilled vegetable dishes. Tandoori Paneer is a grilled cottage cheese slab flavored with mustard and stuffed with a spice mixture commonly used in the Southern region of Hyderabad. It has a robust, in-your-face flavor that’ll make your taste buds sit up, but is a bit overpowering. The bitterness of the Spinach Tikki is mellowed by the nutty flavor of its sesame seed coating. The stuffing of the Vegetable Samosa is mildly spiced, and the outer pastry is crisp. Chandni Broccoli, a grilled broccoli floret topped with a fennel-cheese mixture and silver leaf, is the real standout.  Perhaps I might have eaten more broccoli as a child if it were prepared like this! The main courses on the menu are divided into two sections: contemporary and sharing. The sharing dishes are presented the traditional Indian way in serving bowls, while the contemporary dishes draw on a Western influence, plated as a main dish with two sides.

The sharing dishes we order consist of Banarsi Aloo, potatoes stuffed with dry fruits and khoya (a ‘cheese’ made of dried milk) in tomato sauce with a splash of tamarind juice, and Khumbi Tikki Saag, mushroom dumplings in spinach gravy. The potatoes are tender, and have a nice sweet and sour flavor as the dry fruits, tomato and tamarind harmonize perfectly. The spinach gravy is delicious, given some more body and depth of flavor by the use of pureed mushrooms. The dumplings, however, are so soft that they almost become one with the sauce, and don’t have a very distinct taste despite using three different kinds of mushrooms. These are served alongside an assortment of breads, including a black olive and sun-dried tomato naan (perfect with the mushroom-spinach sauce), and red onion and coriander naan. They both have very strong, vibrant flavors and are just delicious. We also order the Roghani Paneer Biryani, with a mix of kashmiri spices and cubes of cottage cheese. While the overall flavor of the dish is nice, the paneer doesn’t add much to it. It could just as well have been a plain pulao. The contemporary main dish is Lifafa Baingan, or ‘Eggplant in an Envelope’. It uses the French ‘en croute’ cooking technique in which the eggplant is wrapped in a pastry crust. It’s served with grilled baby eggplant in spinach sauce, and truffle rice. The eggplant’s flavor is front and center, complemented nicely by the truffle and spinach. The pastry is a bit greasy, however. For dessert, we opt for the Ashiana Aan and the Chocolate-Sevian Delice. The Ashiana Aan consists of four little desserts presented on an oblong tray, and is a mixed bag. The Gajar Halwa (carrot pudding) Semi-Freddo is delicious, while the White Chocolate Samosa has more of a strong coconut flavor than a chocolate one. Khoya Crème Brulee with boondi (mini fried gram rounds) consists of two good flavors that don’t marry well, and it lacks the custard-like texture of a classic crème brulee. The final component, Rasmalai with Pistachio Rabdi, is easily the best one, thanks to the pistachio rabdi’s nutty and almost savory taste, which balances out the rich rasmalai. After devouring that, the Chocolate-Sevian Delice seems a bit daunting, but we give it a try and are glad we did. The dish is made up of a chocolate ganache cake topped with mango and silver leaf alongside roasted vermicelli with grated white chocolate. The dish is wonderfully rich and indulgent.

Ashiana by Vineet has some fairly unique and ambitious takes on Indian cuisine. Each course presents an interesting concept or flavor combination, such as the khoya with broccoli, although the execution does falter on a few of the dishes.

share An evening at Ashiana by Vineet on social media channels