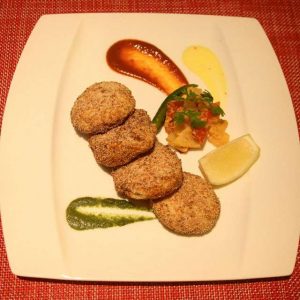 The Oberoi is one of India’s landmark hotel groups, and holds a reputation for luxury and excellence in all facets of its operation. It has also been a training ground for some of the world’s finest Indian chefs. Thus we expect quite a bit from Ananta at the Oberoi in Business Bay, whose chefs have worked at several of the group’s Indian hotels before heading to Dubai.

Unlike some of the other restaurants I’ve been to, the décor at Ananta doesn’t boldly announce itself as ‘Indian’. There are no murals of Mughal art or ornate archways and columns. Beige and red tones infuse the atmosphere with warmth while keeping it simple. However, the understated look of the dining room serves to highlight the open kitchen, which dominates the space, and where chefs cooking with traditional coal-fired clay ovens add the requisite Indian touch.

We’re seated by one of the large windows on one side of the restaurant, overlooking the Oberoi’s main courtyard. After placing our order, we begin with an amuse-bouche: a small glass bowl containing a dhokla, a traditional Indian snack of steamed rice and chickpea batter. The dhokla has a very delicate flavor and texture, and a dollop of apple and pomegranate chutney on top gives it a nice tangy kick.

Our appetizers consist of a duo of unique kebabs. Dahi ke Kebab are discs of hung yogurt in a breaded coating. The creamy yogurt filling combines with the crisp exterior to make for a delightful bite. Our second kebab is Rajma ki Galouti, a vegetarian take on a classic mutton kebab, using kidney beans instead. The kebab just melts in your mouth and has a solid earthy flavor; the apple and pomegranate chutney makes a second appearance here. It’s hard to say which kebab we like more.

We’re then offered a palate cleanser in the form of Aam Panna, a spiced mango drink common to the region of Maharashtra. It’s a refreshing little shot that carries us into the next course.

Of the main dishes, the Badam Aur Tulsi Ke Koftey is the one dish that’s slightly offbeat. Pyramidal dumplings made of cottage cheese, almond and basil have a nutty and slightly sweet favor that’s bolstered by cashew nut yogurt gravy. It’s not as rich as I had expected, though a more prominent basil flavor would have added a sharp note to the otherwise mild dish. Bhutta Methi Palak is a fragrant spiced mix of spinach, fenugreek and corn. Sauteed garlic helps to bring out the flavor of all three main components, and it’s a nice complement to the nutty dumplings. Chana Masala is a spiced chickpea dish that’s a North Indian specialty. The flavor is wholesome and absolutely authentic.

We get a trio of breads on the side. The Pistachio Sesame Naan is great, the Truffle and Cheese Naan is a tad strong, and the Kalamata Olive Naan doesn’t work with any of the other flavors at the table. The Saffron Pulao is essentially white rice infused with saffron rather than the more common vegetable-laden pulao, but the flavor is nice.

For dessert, we have the Fried Malai Kulfi and the Carrot Halwa Spring Roll. The former has a lot of elements on the plate, including a gulab jamun crumble, vanilla foam, grape-passion fruit coulis and the fried pastry shell encasing the kulfi. They all come together in perfect harmony. The spring roll looks like it might be too oily, but is actually quite light and crisp. Any worries about oiliness are washed away by the taste of the halwa filling, which is just perfect. The pistachio rabdi dipping sauce on the side is delicious.

Ananta appeals to lovers of traditional Indian cuisine, as well as those looking for a more contemporary touch. The food isn’t the only thing of note, however. Service is very attentive, and it’s the only Indian restaurant of the ones I’ve visited lately where I was asked how spicy I wanted my food (I went with ‘very’). Packaged in a refined and elegant setting, Ananta is an endless source of gastronomic pleasure.