China Grill Dubai | An out of the box concept 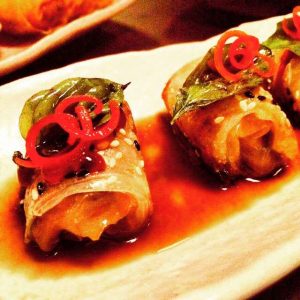 China Grill, has been in the Big Apple for over 25 years. Once a shrine for the glamorous and chic, it had slowly began to lose its hype over the years. Recently however, Geoffrey Chodorow and his team have been working hard to take his flagship restaurant chain back to its glory days. With a “new generation” of China Grill slated for Miami this year and a revamp to the New York location in the coming years, the restaurant is getting hot again and is ripe for its introduction into the Dubai dining scene.

Approaching the Westin Hotel from Al Sufouh Road you are greeted by a large black sign featuring a coat of arms with chopsticks (instead of swords), a perfect illustration of the restaurant – an Asian fusion-sharing concept with European influences. Following the sign you drive into a valet entrance exclusively for the restaurant and separate from the hotel (A hot trend at upscale restaurants in Dubai recently).

The elevators take you straight to the massive lounge area and you are escorted downstairs towards the dining room. The interior comprises of a giant windowless room with extremely high ceilings, a dark and sexy interior, and a plethora of extravagant lanterns creating an upscale vibe reminiscent of 1980’s Bond. There were quite a few vegetarian dishes on the menu, and since there was 3 of us, we were able to order pretty much all of them (minus a few sides).

The food came out in three savory courses. The first dishes to arrive were the Wild Mushroom Spring Rolls, the Jade 5-Vegetable Pot Stickers, the Pan-Fried Noodle Boxes, and two sushi rolls. The Noodle Boxes were an instant hit, probably one of our favorite dishes on the menu! The crispy rice noodles were almost like a miniature pancake, wrapped into a roll (“box”) filled with a mixture of Asian vegetables and served with probably the best hoisin sauce I have ever tasted. The mushroom broth was potent, slightly sweet and flavourful and the dish was beautifully presented.  Click here for the recipe. The spring rolls were decent, but nothing out of the ordinary.

The pot stickers were another highlight. The dim sums were wrapped in spinach, perfectly pan fried, and contained a mixture of five different vegetables, which all came together seamlessly. The dipping sauce was a little bit on the spicy side, which we didn't have a problem with! The two vegetable sushi rolls came in eight pieces and included a Vegetable Maki, made with roasted peppers, fried capes, and aged balsamic and a Kinoko Futomaki made with shiitake and maitake mushrooms and an enoki mushroom tempura with black truffles wrapped in white soy paper. The vegetable roll was quite potent, but still tasty and we loved the use of the capers. The futomaki was delicious, especially for truffle lovers! The next course to be served included the Asian 16 Vegetable Salad, the Fire Roasted Eggplant & Burrata, and the three sides: Crispy Kale, Wasabi Mashed Potatoes, and the Baked Crispy Sweet Potato Chips. We didn't love the Asian salad, which we felt was a bit too sweet and had too much vinegar. According to the executive chef Owen Stewart the eggplant was flown in especially from Italy, because the local eggplant is not conducive to the required texture of the dish. The texture of the eggplant was excellent, however the seasoning was a little on the sweet side. We also didn't think the Burrata suited the dish too well, especially in an Asian-fusion restaurant (perhaps a stretch too far to keep up with the burrata trend). We were also not big fans of the sides. The mashed potatoes were a bit dry, the friess were not crispy and the kale was too oily.  In fact the crispy kale would have been far better had it been baked with a touch of oil, rather than deep fried in oil. The final savory course to be served was essentially two noodle dishes: a Wild Mushroom Profusion Pasta, and Grilled Tofu Noodles also topped with wild mushrooms. The mushroom pasta was fantastic. The mushroom foam tasted similar to the broth in the Noodle Box and the actual pasta itself was cooked to perfection. According to the chef the final savory dish was his favorite vegetarian dish on the menu, however not very well understood by the customers. We did not enjoy the dish at all as we felt that the texture of the tofu skin was too tough and we didn't really enjoy the taste. The highlight of the meal was probably the innovative desserts. We ordered two - the Chocolate Flambé and the Cheesecake Lollipops. The flambé is presented in a round dome shape with the map of the world imprinted on the surface. This is set on fire and we are left to watch the chocolate melt away to revel the soft banana, caramelized almonds, and a rich, dark, smoky flavor in the chocolate (http://instagram.com/p/xyQhPApoI4/), which the waiter described as the "end of the world".  The lollipops were just as great, presented on a bed of grass (which we loved, of course) with a slightly crisp outside shell and a beautifully soft cheesecake on the inside. The cheesecake came in four individual flavors that included strawberry, passion fruit, blueberry, and lychee.

Overall we were extremely impressed by the scale of the restaurant, the décor, and for the most part the food. Although there were a lot of vegetarian dishes on the menu, the majority of them contained mushrooms, so if you aren't a fan there isn't much for you here. If you like mushrooms however (like most of us here at VeggieBuzz), then you are definitely in the right place!