VeggieBuzz• 4 October, 20164 October, 2016Kale. Chia seeds. Acai berries. These are just some of the superfoods that have risen to prominence in the last few years because of their dense nutritional content and the many benefits they provide to one’s overall health. More recently, a new superfood has started to make waves: seaweed. If you’ve ever had ... 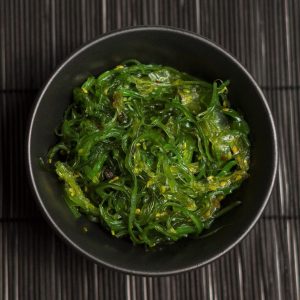 Kale. Chia seeds. Acai berries. These are just some of the superfoods that have risen to prominence in the last few years because of their dense nutritional content and the many benefits they provide to one’s overall health. More recently, a new superfood has started to make waves: seaweed. If you’ve ever had miso soup, sushi or a salad at any Japanese restaurant, you’ve probably tasted this aquatic vegetable. But you might be surprised to know that there’s much more to seaweed than its salty umami flavor.

Seaweed might just be the most nutritionally dense leafy green around. Since nobody has ever farmed the seabed, it’s much richer in minerals than most types of soil. As a result, seaweed packs much more calcium than broccoli and is comparable to most pulses and grains in terms of protein content. Seaweed also contains the one mineral that’s missing from most other foods: iodine.

Iodine is a vital ingredient for improved thyroid and brain health, and as people reduce their salt intake over health concerns (or use iodized salt), they also consume less iodine. Eating just one gram of seaweed can help take care of your daily iodine needs!

Seaweed is very high in fiber, which makes it good for digestion. It also has heart-healthy properties, as well as minerals that help keep the skin healthy and the hair strong.

Another important aspect of seaweed is that it detoxifies the body. Seaweed absorbs toxins from the liver and digestive tract, and also removes lead and cadmium from the body, which are usually built up as a result of smoking and industrial waste in the environment.

The Japanese diet, which involves a lot of seaweed, is considered to be one of the healthiest in the world, and it should come as no surprise that life expectancy in Japan is also higher than most other countries. As with any other food, it’s important to recognize that too much seaweed is a bad thing. Dulce, for example, is a type of red seaweed that contains more than 30 times the amount of potassium as a banana, which can be dangerous for those with kidney problems.

It should also be noted that seaweed supplements aren’t regulated, so if you plan to use seaweed powder or pills, they may contain traces of toxic metal compounds. Keep an eye out for well-known brands, or consult with a medical professional if you have any pre-existing health problems.

Seaweed can be used the same way as any other leafy green. The only major difference is its salty flavor, so you might want to use it sparsely to avoid overwhelming your taste buds.

You could serve it in a salad or layer it into a sandwich or wrap. Finely chopped seaweed makes an excellent addition to stews, casseroles or mashed potatoes. You can even give your smoothie or freshly pressed juice and extra burst of flavor (and nutritional value) by mixing in some dried seaweed. Where To Find It

If there are any Asian specialty stores in your neighborhood, they’re sure to stock it. Otherwise, you can check out the Ethnic Foods aisle in any major hypermarket.