Sometimes I speak to vegetarians who feel like they can’t enjoy a meal at a great restaurant because they don’t eat meat or fish. This bothers me. But I can understand why they feel this way – there are certain places that are still not very accommodating for vegetarians, or that will simply serve you a few sides to compensate. So when I get to enjoy a fabulous all vegetarian tasting menu at a three star Michelin restaurant like Eleven Madison Park, the 4th best restaurant in the world, I feel the need to talk about it!

A few days before the meal, I got an email to welcome me back (nice to know I am in their system), and continuing as follows:

“A few friendly reminders: we serve an extended tasting menu… at $225 per person, which lasts approximately 3½ hours so please plan your day accordingly. If you need to cancel, please do so before our 48-hour cancellation policy goes into effect (abridged)."

Yup, it was going to be a dent in my wallet, but I had no intention of cancelling. Rain, snow or shine, but I’d be there. And guess what, it did snow. As further directed in the email, I replied letting them know ahead of time that I am vegetarian. Eleven Madison is very accommodating towards any dietary preference or allergy even without preparation, but nonetheless, it’s a good idea to let them know a few days ahead of time. So on a cold snowy Friday afternoon, my family and I enjoyed a creative journey though New York, emphasizing on locally sourced ingredients and touching on New York’s culinary history.

We started out with a savoury cheddar and apple version of New York’s traditional black and white cookie, and in a perfect loop (about 12 courses later), we ended with a delicious sweet version of the same cookie with apple molasses.

The Oysters Rockefeller is a historic New York dish that dates back to the 1890s, and was used as the inspiration for course number 2 on their tasting menu. Thus we were served a vegetarian alternative in the form of hot and cold sunchokes with apple and black chestnut. The hot and crispy version was served on one side of an elegant wooden box over warm rocks, and the cold version in the second compartment over a bed of ice, both variations having differing flavours and textures. It was just a small bite sized portion of each per person, but we savoured them to the last morsel. Next, we experienced the traditional "appetizing stores" in New York, which under kosher rules are not allowed to serve meat together with dairy (but fish is acceptable). Thus, as a vegetarian alternative for the smoked fish served as course number 3, we had smoked daikon with a delicious cucumber cream cheese, together with tiny bowls containing a smoked parsnip salad, a carrot pastrami and winter radish with truffle. Smoked, roasted, dehydrated and picked New York turnips served in a Turnip broth were next, which reminded me of the level of time and preparation involved in such a simple looking dish, as each bite carried with it a completely unique flavour, attributed to the cooking technique.

What appeared to be just a single leaf of Kale was brought out as course number 5, which added an element of humour and surprise. Our server then eloquently explained what was underneath: smoked pear, creamed kale and pear puree with walnuts; a fantastic combination, which was a little bit sweet and a little bit smoky, and came together seamlessly. Eleven Madison’s twist on the Waldorf salad was prepared at our table for course 6, as we listened to a story about how Oscar Tschirky first created this salad at the opening of the Waldorf Astoria back in 1893. We watched as our server effortlessly peeled, chopped and grated the Granny Smith apples through a mouli grater, and then tossed them with celery, walnuts, grapes and a house made lemon mayonnaise. The salad was placed on a plate that also served as a cover over the delicious celery root and apple soup, a delightful “surprise” underneath! Staying with New York’s seasonal root vegetable, the next course was an outstanding grain free celery root risotto with a delectable black truffle sauce. This was followed shortly by 2 different quinoa and cauliflower preparations; the main element was roasted with garlic and pine nuts, and a small bowl consisting of a dry quinoa served over a cauliflower mouse, with a garlic and cauliflower garnish was served alongside. As I was describing a wonderful celery soda I had tasted during my last meal at Eleven Madison to my family, our server overhead this and brought out one for each of us, which turned out to be a perfect accompaniment for our next course. As a twist on a traditional cheese course, we were served a fondue of local Jasper Hill Farm Cheese blended with potato, accompanied by some pungent mustard, a rhubarb based jelly, bitter greens, and warm pretzel sticks for dipping, inspired by traditional New York City pretzels served street-side. The first dessert course was a fun collaboration between the wine and pastry teams, wherein a fairly large, elegantly crafted spoonful of dessert wine was served alongside a pre-dessert of apple sorbet with orange crumble.

As I was watching the snow falling on Madison Square Park through a large full length window painted with a maple leaf (part of Eleven Madison’s logo), our next dessert arrived, which our server ironically described as “snow” aged with maple barrels from New York, as well as milk and bourbon! This dessert was inspired by the North East winter tradition of children playing in the snow with sticks covered in maple syrup which they took from the "sugar shacks." They would insert a stick into the barrels where the sap from sugar maple trees was boiled into maple syrup, sprinkle it on the snow, and then eat the hardened maple syrup as candy. While we would have preferred one of the desserts to be warm, we thought it was a creative idea and laughed over a joke about how we couldn’t even escape the snow while we were inside! We ended with chocolate covered pretzels with sea salt and a box of sweet black and white cookies. A bottle of apple brandy made exclusively for eleven Madison was also placed on our table to enjoy as we pleased, but since we were nearing food comas, we just had a taste. Finally, we were each given a bag of Eleven Madison Park’s fresh house made granola to enjoy at breakfast the next morning along with the menu outlining what we had just eaten. As I am nibbling on the leftover granola as I finish writing this, Id like to touch back on the email I received from the Maitre D’ a few days before my meal. The only correction I would make to it would be: “Please allow an extra hour or two for a food induced coma after the meal.” Sure, it’s definitely a large chuck of time to put aside, but its worth every bite! 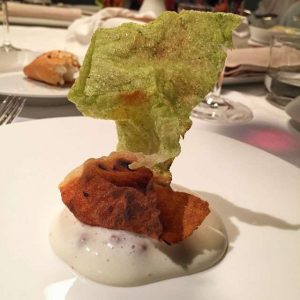 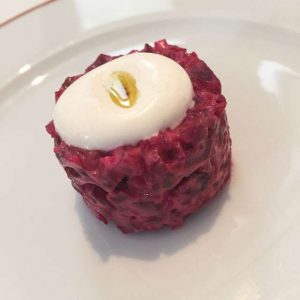