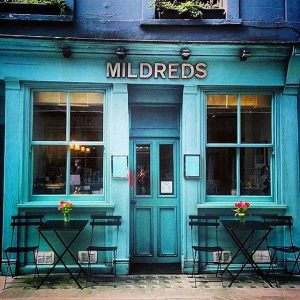 I had just a couple of days in London recently so a visit to the highly recommended vegetarian restaurant Mildred’s was definitely on the agenda. I was visiting a friend, so I dragged her out with me for the meal (she happens to be a serious carnivore).

Mildred’s is a café style casual restaurant and has a very relaxed vibe. They don’t take reservations, so to avoid waiting in line we went for a super early dinner at 5:45pm. We were seated right away towards the back of the restaurant, which was still nice and bright due to the glass terrace directly above us. It was good timing, as the restaurant filled up shortly thereafter.

As I looked over the menu, I noticed that it had a varied mix of cuisines and dishes, with nothing really tying it together other than the fact that everything was vegan or vegetarian. From Mexican to South East Asian to Burgers and Pasta, it did seem a little all over the place. Even though I am a vegetarian, café style vegetarian restaurants with a mishmash of cuisines aren’t really my thing, as I feel they lack on creativity. Having said that, I guess it has been working for them; the restaurant has been around for over 40 years and is considered to be a Soho’s institution for vegetarian food. A little confused about what to go with, we asked for some guidance from our waitress, who strongly recommended the Sri Lankan sweet potato and cashew nut curry. I quickly scanned the tables around me and noticed that almost all of them had ordered this curry, so it was a no brainer for us to do the same. We also ordered the organic black bean burrito as a second main, and the Kale Vadas as an appetizer. The Kale Vadas arrived shortly after our drinks with 3 on the plate. They were served hot and crispy and tasted like just like a well-done deep fried indian vada made with chickpea flour (besan). Although I couldn’t really taste the kale, it was still delicious. The fresh mango sauce served on the side was slightly sweet which was a lovely contrast to the mild spice of the vada.

The burrito and the curry arrived together and we took it in turns to try both. The coconut based curry with chunky sweet potatoes was just warm wholesome comfort food in a bowl and was served around yellow rice and peas. The tomato sambal served alongside was like a tomato paste with hints of sweetness from the coconut, which added to the deliciousness of this feast. It was a very large bowl for one and definitely filling. This dish would probably have been enough on its own, but I do love variety, and my friend was raving about the burrito she had in front of her! So of course, I had to try a piece. The burrito was quite large and topped with a tangy tomato sauce and melted cheddar cheese. It was carb overload for us as the burrito was also stuffed with green tomatillo rice as well as black beans and red peppers. Nonetheless, she was right when she said it was good!

After a deep fried appetizer and two very substantial mains, we were definitely not in the mood to indulge further on dessert, so we decided to skip it.

Overall, while I enjoyed each individual dish, I don’t think they really worked well together, as we started with Indian, moved on to Sri Lankan and ended with Mexican! Would I go back to Mildred’s on my next visit to London? Probably not; there are plenty of great restaurants in London with vegetarian options on their menus. Having said that, there’s a small chance that I would order the Malaysian curry to go if I wanted to warm up with a wholesome bowl of comfort on a cold winter day. 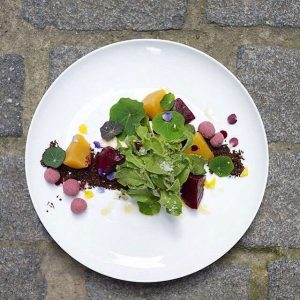